Marie Montoya hasn’t seen her ex in over fifteen years when he contacts her about meeting at a beach house. She knows she should stay away, but cannot forget their connection so she goes against her better judgment only to find out later that things are not what they seem. Will the star crossed lovers reunite for good, or will destiny tear them apart? 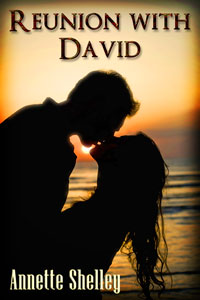 He smiled shyly at her and gazed into her hazel eyes. He took her hands for the first time. “It’s going to be okay.”

Marie nodded. She knew it would be and she felt better than she had in any recent memory.

David held her hand, rubbing his fingers over each one of hers. He led her down a long hallway on the far side of the house into what looked to be a child’s bedroom. There were cars and trucks and stuffed toys everywhere, baseballs drawn on the walls and a bright blue comforter with race cars on the tiny twin sized bed.

David didn’t speak. He gently laid her down and undressed her slowly like he’d always done when he was alive.

She reached up to touch him and pull the hair from his face. He looked sexy like she remembered. She unbuttoned his long sleeved plaid shirt and revealed strawberry hair that perfectly lay over well-formed muscles.

He sat up on his knees and finished the job of removing the shirt. He hadn’t changed a bit. He still had the same beautiful body and the tattoo.

The Tattoo. She couldn’t believe she’d forgotten the time he went to have her name emblazoned on his arm in a deep tribal band. The name itself could only be revealed to the most discerning eye.

Marie traced her fingers over it while memories of all the times they’d shared came rushing back—her fear when she’d first seen it, wondering what it meant for someone to put such a permanent marker on their body for all to see, for all eternity.