Jackson Bridges, released from a court-ordered, two-year stay at a psychiatric hospital for a brutal attack on his wife, blames his ex-wife Zoey’s mother for putting him there in the first place. His own domineering mother who controls every aspect of his and his two older brothers’ lives compounds his bitterness.

Christine Westmiller has spent the past two years taking care of her daughter Zoey who fell into a coma after a brutal attack by her husband Jackson Bridges. When she learns that her former son-in-law has been released from the psychiatric hospital, she is bitter and has trouble coping with her emotions. 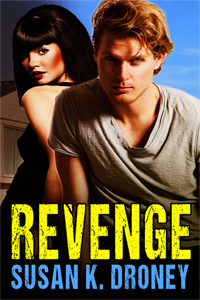 “I’ll give you your release instructions on your final visit. I’ve already gone over most of it with you. Take your medication as prescribed and report as scheduled to your outpatient counseling sessions.” Dr. Gilbert Simpson shifted his heavy body in his large well-worn, stiff wooden chair, as he looked hard at the twenty-eight year old, dirty, blond-haired, blue-eyed, husky, square-jawed man sitting across from him. There was no doubt in his mind that Jackson Bridges was deeply disturbed.

Jackson eyed the doctor coldly. He shoved his hands into his jeans pockets. “You don’t like me. I could tell from the first day I met you.” He shrugged his broad shoulders. “That’s okay because the feeling’s mutual, Doc.”

Simpson kept quiet as he studied him. Without the proper daily supervision and medication the hospital gave him, he would snap again. It was only a matter of time. However, once Bridges completed his court-ordered outpatient counseling, the doctor couldn’t force him to continue treatment. Bridges, according to the justice system, would have fulfilled all obligations of his court-ordered sentence. A sentence Gil Simpson thought he should have extended, but his hands were tied. The courts made the rules, not him. Only if Jackson had demonstrated violent tendencies while institutionalized, would the courts consider extending his sentence. He hadn’t and it was because of being properly medicated. Once off the medication, Gil Simpson could only imagine the violence the young man could unleash if provoked.

Jackson leaned closer. “Why don’t you ever say what you really think? Just once I want you to look me in the eye and tell me what you think and not what your damned books tell you to think.” He swept his hand toward the floor to ceiling bookcase crammed with textbooks and journals. He shook his head in disgust. “How can you stand to work cooped up in this dump day in and day out?” His eyes surveyed the rest of the small office.

There was little furniture in the space. Besides the bookcase, there was a large heavily marred desk, the wooden chair Simpson was seated in, and two vinyl-coated chairs, which sat in front of the desk. A row of filing cabinets lined one dull gray wall. A small window with bars let in little light since it faced a small alleyway, which connected at one end to the main part of the building.

Jackson looked toward the window, then back to the doctor. “Nice view,” he scoffed. “You’d think they’d at least give you a decent office.”

Simpson rubbed his chin. “I’m used to it.” He looked evenly at Bridges as he removed his reading glasses.

Jackson laughed a hollow chortle devoid of any emotion. “It must really piss you off.” He cocked an eyebrow, his blue eyes slanting. “My nose has been clean in here. I did my time. You can’t keep me locked up in here and that’s eating at you. I can see that by the way you look at me. You wanted to find a reason to keep me locked up, but you couldn’t.”

“I won’t be seeing you again until our final session.” He watched Bridges, expecting him to leave. When several seconds had passed and Bridges made no effort to vacate the office, Simpson frowned. “Obviously you have something more on your mind.”

Jackson’s jaw tightened. “All that mumbo jumbo and those fancy diplomas hanging on the walls don’t mean a damned thing.” He removed his hands from his pockets and pointed a finger at the doctor. “Nobody can really get inside somebody’s head. They can try, but they can never know everything in there.” He placed his hands palms down on the edge of the doctor’s desk and glared at the older salt and pepper haired man. “You never believed me even after I told you everything on what that bitch put me through. That constant nagging would drive any sane person over the edge.” His eyes slanted. “You never acted like you believed a word I said.”

Simpson casually leaned back in his chair silently observing him.

“Zoey always brought out the worst in me. I lost it that day. You tried to get in my head, but I still couldn’t remember much about that day. You kept trying to get me to remember something I couldn’t.” He exhaled loudly. “I don’t remember anything except that Zoey kept nagging at me more than usual and wouldn’t stop. I blanked out after that.”

“Everybody else said I did it, but I don’t remember touching her. What does it matter now anyway? She lived.”