The last time Mikial's civilization turned on a savior, they were destroyed. Now Mikial is faced with repeating a disastrous history or defying it. Her people thought the humans had left for good. She believed otherwise. They were both wrong. 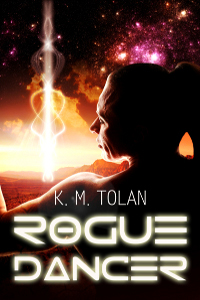 Arms outstretched for balance, Mikial sank down into a crouch, glowering at the one new thing entering her morning routine. An assassin. The hairs along her forearms raised with a surge of bioelectric energy, beads of insulating sweat glistening her palms.

The Datha possessed broad shoulders and a firm jaw line. He regarded her with bright amber eyes similar to her own. His braids reminded her of spun straw. Standing there in a black dress uniform with his pressed side skirts, she considered him quite attractive save for the pistol he aimed up at her. His not immediately opening fire on her suggested there might be some maneuvering room available. Perhaps some Kinset pride to leverage, she considered, scowling at the sword badge over his right pocket. “I am a combat veteran…and the best you can do is shoot me like some rabid animal? Is that all the honor Kinset’s Datha can muster these days?”

His expression flaunted the usual brand of professional impassivity she had been receiving since her incarceration. To her relief, he flung the weapon toward the door. “Had my intentions been other than honorable, you would already be dead. Not that it matters. I placed within the top rank of my graduating class. The end result will be the same, but it will come with both honor and respect for your past service.”

Mikial leapt to the floor across from him, her lips drawing back. “And what is so worth my life? Your Holding’s Taqurl pride?”

Hatred oozed out from behind the edges of the Datha’s stone face. “No Servant will ever rule us!” He launched himself at her.

And you expect me to sidestep into some eloquent combat stance, don’t you? She obliged him, favoring her left foot only for the instant it took to see him adjust accordingly. Mikial switched balance and flung herself bodily into his face. The crude maneuver threw him on his back with her splayed across him. Twisting around, Mikial seized his head with drawn claws and discharged a fatal jolt of electricity through her palms. She rolled off his shuddering body and glared down at it, her lips curling back. “I wasn’t in the top rank…I was First!”