Passing through eight states and stretching from Chicago to Los Angeles, Route 66 was once the main artery for westbound travelers.  The highway inspired a hit song, a television series, and the Pixar animated movie, Cars.  No longer part of the U.S. highway system, most of Route 66 is gone, leaving a few stretches of 'Historic Route 66' and local festivals to commemorate its place in American pop culture. 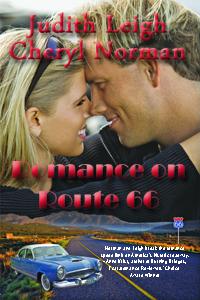 More Than He Bargained For - Judith Leigh

In 1949, David Montgomery travels Route 66 on his Harley Davidson motorcycle. Just outside San Bernadino in the tiny town of Cactus Falls, he gets More Than He Bargained when he has a flat tire beside an orange grove owned by lovely widow Rachel O'Hare. Drawn to her and her adorable twin sons, he's in no hurry to leave. But Rachel wants nothing to do with the handsome daredevil. Her late husband lived his short life on the edge, and she's not about to put her sons through that kind of grief again. The sooner David's on his way, the better. Or is it?

In 1969 Missouri, Celeste Lucas mourns her husband, a victim of a kidnapping gone deadly wrong the previous year. But she discovers disturbing secrets about the man she thought she knew. Jack Lucas harbors a secret love for his sister-in-law, one he's tried to forget. Then she shows up asking for his help. Should he tell her his suspicions about his brother, or does he have a serious conflict of interest?

In 1979, Stone Thunderhawk thinks the new woman in town looks eerily like his dead wife. Author Lynette Sinclair thinks Stone looks like the Cherokee hero in her last novel. The two are co-owners of a house in Forgiveness, Oklahoma, thanks to Shanna Thunderhawk's will. Why has Stone's wife kept the house a secret, and why leave half the house to a woman she didn't know? And whose spirit haunts the building? The small-town artist and the New York novelist don't have a ghost of a chance at romance. Or do they?

Matt Hershey didn't realize his vintage 1954 automobile once belonged to a guy who jilted his pregnant girlfriend. Suddenly transported from 2009 to 1959 Santa Rosa, New Mexico, Matt has the chance to make changes in history and save Olivia Carter from a terrible fate.