In Brief by Kate J. Cameron

Kara and Jack, two highly successful oil and gas attorneys, have reached an impasse over the final terms of a large deal they have been working on for weeks. Alone in the conference room, each being stubborn, each angry as hell at the other … something has to give. And in this case, it’s buttons, zippers and all manner of clothing.

Taking Down Her Particulars by Courtney James

When the fabled Farchetti diamond goes missing from Tiffany’s, Inspector Hart is called in to handle the case. Faced with the classy, smooth talking cat burglar Eve Cassidy, Hart begins to suspect that he is out of his depth, in more ways than one.

Stephen looked every bit the mid-level accountant he was, fastidiously groomed and conservatively dressed, hair parted to the right, dark blue suit slightly shiny with wear. But even mild-mannered accountants can dream. And so when the tall, slender brunette got on the bus at the next stop, Stephen hoped and prayed she’d sit down on the seat next to him, knowing she wouldn’t. But she did, and the man’s dream quickly and unexpectedly turned into fantasy … then nightmare. 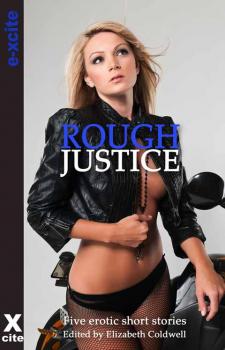 ‘Are you giving me permission to search this house and grounds?’

‘Do whatever you want,’ Kelliann snapped as she headed toward the front door. She had to force herself not to look back; the truth was that the sexy as hell butch of a cop had turned her on and she was angry and unsettled. She was far too aware that her hips were swaying a little too much, that her back was too straight and that she had thrown her chest back and up in a gesture she knew damn well made her small but firm tits bounce with every step. Halfway up the stairs she remembered why she was there and panic set in, but it was too late to rescind her permission, Presley was so close behind her that she could feel the heat of her body against her hips. She had no choice but to turn the key in the lock and step inside the tiny little cabin.

Presley knew instantly that nobody was there and had not been for a long time. The place smelled musty and felt cold despite the sunshine outside. The windows were heavily covered with blinds and the furniture was all covered with sheets. Every step they took left a track on the dusty hardwood floor.

Presley wasn’t. Her gut was rarely wrong and she had trusted it enough to follow Kelliann out to the deserted lake. She gave the front room of the cabin a last glance, trying to pinpoint some little clue as to why Kelliann had chosen to come out there, hoping to spot a stray slipper, a sock, but finding only the small feathers of cold air blowing through the cracks around the old wooden frame surrounding the window and the endless dustiness.

Kelliann began to fidget nervously and her gaze kept darting to the closed door that lay off the living room. Presley turned from her inspection and the sight of that furtive gaze triggered her instincts. She strode toward the door and instantly Kelliann moved to block her, a mistake that made Presley’s instincts kick in. She knew, without a doubt, that there was something hidden behind that door. Kelliann tried to step in front of her but Presley merely moved her aside. The shock that her warm and very strong hands left on Kelliann’s upper arms was disconcerting and somehow exhilarating at the same time.

‘I think you have seen all you need to see,’ Kelliann stuttered and Presley gave her an icy glare before moving to the door. Kelliann could not help but notice the way Presley moved, how her body cut through the air with a slinky, feline grace. Her heart was thundering with more than fear and a sudden spurt of moisture soaked her panties, startling her and exciting her even more.

No, she told herself, this is not happening, no way do I want her … But she did and she knew it. Her nipples drew tight and her breath became short as she watched Presley try the doorknob of the room only to find it locked. A flush hit Kelliann’s face as Presley drew one foot back and kicked the door. A loud crash sounded and the door slammed open with a ripping, tortured squeal. Kelliann remembered what was in there and rushed to stop Presley from entering but it was too late; the cop had disappeared into the room.

An evil grin stretched across Presley’s face as she stared around at the dungeon that had been created inside the bedroom of the cabin. A complicated series of pulleys and ropes hung from one corner, a bed with high wooden posts and a bare mattress sat in the middle of the room and one wall contained a series of hooks from which hung a variety of wicked implements. Presley whistled in appreciation at the sight of the master craftsmanship of the whips and elk hide floggers; their artistry and elegant brutality was obvious from where she stood and she turned her head to look at the manacles hanging from iron loops driven into the opposite wall and the St Andrew’s cross. The bright red rolling tool box that stood at chest height interested her greatly and she strode to it, opened a drawer and felt heat fill her lower belly at the sight of needles, cocks in various shapes and sizes, tubes of lube and everything else anyone would need to do a scene.

Humiliation crawled along Kelliann’s veins as she stood watching Presley tour the dungeon. She was used to people being afraid or scornful of her proclivities but she had never invited anyone who was not a play partner to the cabin and the sight of an unknown person examining her things and, by extension, her sexual appetites, made her feel ashamed and a little frightened.

‘Nice whips, who made these? I have never been able to find a 24 plait this supple.’

‘Axel,’ Kelliann said and then she really heard the question. Lust bit into her as she watched Presley take the whip from its hook, turning it over and over in her strong capable hands, trying it out by giving it a few practice throws. The cracks that resulted made goosepimples erupt on Kelliann’s skin. That Presley was a well versed whip player was obvious and she found herself wanting to kneel, to bow her shoulders and allow that whip to play along the sensitive skin of her back and shoulders.

Presley felt the first surge of endorphins flooding her system as she held the gorgeous and well broken-in whip in her hand. It felt perfect there and she turned to see Kelliann looking at her with an expression of utter longing on her face. That was all it took. The two of them exchanged that one smouldering look and then Presley was in front of Kelliann, her free hand ripping at the soft T-shirt that Kelliann wore, tearing it away. Her silky red bra followed; it fell to the floor and Kelliann shivered as the air stroked her nipples, the sensitive skin of her belly. Kelliann yanked her own jeans down, tangling them into her shoes and then kicking everything off.

The whip stroked the air gently, landing softly on Kelliann’s shoulders but not biting, warming her up and turning her on so much that she cried out and pressed one finger to her clit.

‘No,’ Presley snarled and yanked Kelliann’s finger away. Slick, hot liquid bubbled from between her thighs and Kelliann whimpered as she stood still, letting the whip stroke her faster and harder. Her ass cheeks quivered as it landed, leaving behind red lines and making her sob out loud with pain that was being translated into pleasure by her nerves and skin.