A British romance by Cara Cooper.

Cassandra Waverley is thrilled with her beautiful harbourside restaurant. She's escaped a stressful job in the city and a personal meltdown which haunts her still. Just when she is relishing her seaside haven, dark, brooding Adam Hawthorne turns up, taking an unhealthy interest in her property and turning her world upside down.

He's a serious threat, both to her business and to her heart. The more she learns about him the more she realises he's a man with mysteries in his own past. Throw in a wayward younger sister and a rescue kitten who needs a home and Cassandra has her work cut out for her. Will she ever find a safe harbour, and a love that will endure? 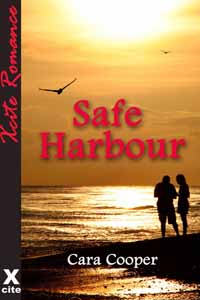 He was every possible kind of threat. Cassandra Waverley stood with folded arms and her hand cradling her chin, studying him out of the window of her small harbourside restaurant. If he had noticed her, he wasn’t letting on. She bit her thumbnail and shifted uneasily from one foot to another.
‘He’s been out there for 40 minutes now. Someone should go out and ask him what he’s up to.’
Megan sat at one of the little round tables and picked up another fork, polished it with the fresh white tea towel and peered at the stranger standing across the road. ‘Well, you’re never backward in coming forward. You could do it.’
‘I suppose I could, but unfortunately I don’t own the street so I can’t go and accost people walking up and down it and demand to know what they’re doing.’ Cassandra was aware she was being bad tempered, but concern had clouded her green eyes and, apparently, her judgement.
‘Actually, he’s kind of cute, don’t you think?’ Luckily Megan, sweet as ever, hadn’t taken offence. She picked up a spoon and polished it till she could see her face looking back.
Exasperation rang in Cassandra’s voice. ‘If you think someone decidedly suspicious, who has stood for half an hour taking photos of your property and who has stony black eyes that miss nothing is cute, I suppose so. I’d say he looks dodgy.’
Megan stopped her polishing and put her head to one side, considering. ‘Uh huh, dangerous sums him up more like. Wonderfully dangerous, like a big cat waiting to pounce. I’d take bets this sleepy old town hasn’t seen a man as dangerous as that since there were pirates in the harbour.’
‘Yup, and they ran the pirates out because they didn’t want that sort round here. What on Earth do you think he’s up to?’ Cassandra could feel her chest tightening with the tension.
Megan who now had in front of her three neat piles of knives, forks and spoons came over and stood by the window. Megan was short, slightly round with dark straight neatly cropped hair. A complete opposite to her boss, Cassandra, who stood tall, with long untameable blonde locks and olive green eyes. The only similarity the two girls had was the standard waitress uniform they wore of black hipster trousers and crisp white shirts. Even here they differed in that Megan spilt plumply over the top of her waistband whereas Cassandra’s hip bones could be seen underneath hers.
‘Maybe he’s a tourist,’ ventured Megan.
‘On his own, and pacing backwards and forwards. I don’t think so. He’s casing the joint in some way.’
‘Casing the joint,’ laughed Megan. ‘You’ve been watching too many gangster movies.’
‘Maybe that’s it,’ sparked Cassandra. ‘He’s either a crook ... or a policeman.’
‘He could be. He’s certainly got the build for it. With shoulders that wide and being that tall he could protect anybody. But why would any policeman be interested in this sleepy old place? Nothing ever happens here.’
‘Good question. Well, that only leaves us with him being a crook of some sort. Now those new antiques places have opened round the corner, he might be sussing them out.’
‘You know what I think,’ said Megan sitting herself down at the table again, taking out a paper napkin and wrapping a knife, fork and spoon up in it.
‘No, what?’ asked Cassandra, all ears.
‘I think you’ve got too fertile an imagination.’ Megan placed the rolled-up napkin in a large earthenware jug and prepared to start the next one.
‘I’m only being observant.’ Cassandra ran her hands along the crystals which dangled from threads in front of the window and threw rainbows from the early morning sun, all round the peppermint green walls. ‘And protecting myself.’
‘Are they part of your protection?’ Megan pointed to the dancing glass crystals.
‘Of course they are. They energise the chi currents which promote harmony and happiness. Perhaps they’ll ward him off.’
Megan snorted. ‘If he really is some sort of crook it’ll take a lot more than a few sparkly crystals and you frowning at him to see him off.’ She didn’t know anything about all that mystical Chinese stuff but she knew that since Cassandra had bought and done up the restaurant, it did have an extraordinarily peaceful feel to it.
Cassandra wandered to the bar at the back of the restaurant with a definite harrumph. Well, Megan might not be unnerved by the stranger but then she didn’t own the Feng Shui restaurant. She hadn’t staked her whole future and virtually every penny she had in it the way Cassandra had.
Taking a pair of secateurs out of the side drawer, Cassandra marched over to the door, a determined look on her face.
‘Crikey, you’re not planning to attack him with those, are you?’
‘Very funny. I’m going out to pick some fresh flowers for the tables and to show him I’ve seen him.’
‘I bet that’ll get him quaking in his smart leather shoes.’