In Sanctuary Creek, the third novel in the pop culture Macroglint Trilogy set in the near future, Chicago is the new home of the Papacy and the American Pope. But all is not peaceful. This American Century of new Catholicism is rocked by evidence of the authenticity of the recently discovered diaries of St. Sebastian (who claims Jesus was a third-rate magician), the suspicious death of one of the new Pope’s closest cardinals, and the rumored existence of a porn video featuring the world-renowned Catholic pop star Angelique and someone very high up in this new American Catholic Church. Only Terry Samson, a widowed accountant and friend of the Pope from before his Accession, can be trusted to find out the truth.

“Tense, involving, Sixers is a smart near-future thriller with a startlingly real sense of plausibility. In a world that's falling apart, can one ordinary person make a difference? Tremendous stuff! Kavanagh can write!”

– Hugo Award-winner David Wingrove, author of the Chung Kuo series and the Roads To Moscow trilogy 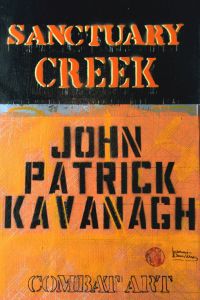 Gradings, the top CCNN anchor, appeared on the screen.

"Thank you, Pam. For those of you just joining our broadcast, an update. An unidentified helicopter has either crashed or landed and exploded within the boundaries of Sanctuary Creek, the American base of the Roman Catholic Church, located in northwest suburban Barrington. Unconfirmed reports list three persons dead, another one or possibly two passengers unaccounted for. State and local authorities have not been allowed to enter the property and the Secretary of Information for the Church, Eugene Cardinal Mannherz, has indicated that it is possible Federal authorities will also be barred from the property until the Church completes its own investigation of this tragedy.

"This would not be the first time that the Church has exercised its power to exclude government officials from the grounds of Sanctuary Creek. Just 18 months ago, three vandals belonging to the so-called Cult of Six, an outlaw organization of disaffected Catholics, broke into Sanctuary Creek to supposedly desecrate the Cathedral located on the property. In the gun battle that ensued, two were wounded and one killed, along with two Vatican Guards who were also injured. All were taken to the hospital on the grounds and State and Federal authorities were not allowed in to conduct any operations until three days after the event, and then with only minimal access.

"Today's events will no doubt serve to increase the air of tension present at Sanctuary Creek, a tension which sources close to the Administration say have been high for months since the still unsolved murder of comedian/impressionist Arthur Guralski in California. Guralski, as many of you know, made his reputation performing impressions of the leader of the Catholic Church, Peter the Second, and was killed in a manner similar to an attack made on the Pontiff when he was the Archbishop of Chicago. Now we're going to switch back to Pam Neri at Sanctuary Creek."