Santa's Village is Deserted. Why?

Santa's village is deserted. Where did everyone go? The Good Fairy is at a loss. What can two young boys do to solve the mystery and save Christmas? 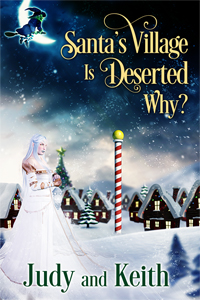 Santa's Village is Deserted. Why?

It was mid-November and the Good Fairy hadn’t heard from Santa in over two months.

What’s wrong? I’d better go and visit him. She waved her wand and flapped her pale green butterfly wings. Her castle faded from view and she stood at the North Pole. It was too quiet. Where is everyone? The place is deserted. There are deep snowdrifts, and some of the elves’ homes are totally buried. This is very worrying.

The Good Fairy headed straight to Santa’s house. The door was open and snow not only blocked the entrance, but was piled deep inside the corridor. She chanted,

So we will know,

Where Santa and his elves all had to go.”

The snow cleared and she flew down the corridor. Santa’s workshop was deserted. No Santa, no elves... what’s going on? The sleigh was parked in the garage, but the stables were empty. Where are the reindeer? I wonder if Mrs. Claus is in the kitchen. Maybe she’ll know where everyone is. She wasn’t. A half-eaten meal was on the table, and the mulled apple juice was frozen. They were disturbed while they were eating. It must have happened quickly. There’s no sign of a struggle. What happened? Where are the elves?

She flew out of Santa’s home and systematically checked every single house. They were all empty. How could Santa and a thousand elves simply disappear? I need help.

She waved her wand and called, “Treasure Fairy, something awful has happened. Drop everything and join me at the North Pole.”

The Treasure Fairy was two inches shorter than the Good Fairy and didn’t like being summoned. She put her hands on her hips and glared at the other fairy with her large, green eyes. “What’s so urgent that I have to drop everything?”

“It’s not just Santa... Mrs. Claus, the elves, and the reindeer are gone as well. The entire village is deserted.”

“When did this happen?”

“I’d estimate weeks ago, as there were huge snow drifts. I had to clear one just to gain access, and in the process probably removed valuable information.”

“This is the Mary Celeste mystery all over again, but worse by an order of magnitude.”