Brokenhearted Sapphire Stone flees New York for the comfort and care of her Aunt Ida in New Bedford, Massachusetts. Coinciding with her arrival is New Bedford’s annual sailing regatta. When one of the tall ships pulls in, Sapphire spies the captain of the Aussie Lady, Brendan Richmond. When Brendan offers Sapphire the chance for a day sail on the Lady, she readily agrees. What starts out as a few hours sail turns into the journey of a lifetime. 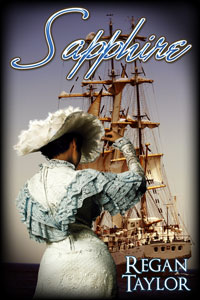 “So when you’re not sailing, what do you do? Where do you live?” The question was a bit brazen for Sapphire, but there was something about Brendan that made her feel completely comfortable asking him.

His gaze still focused ahead, he smiled. “I live on board. It’s rare I sleep on land. Once you’ve slept aboard a ship, felt the lapping of the waves lulling you to sleep, sleeping ashore loses all appeal.”

It didn’t really answer her question—which in truth was whether he had a woman in his life, but it told her something about Brendan Richmond—he didn’t seem to have ties to any one place.

Despite the cool ocean breeze, a warm wind caressed her for a moment before a chill passed through her. Brendan watched her movements, studying her. He reached out as if to touch her hair, then withdrew his hand and looked out over the bow.

Once in the open ocean, Brendan signaled to one of the crew. He turned to her and asked if she was ready for her tour of his ship. Readily agreeing, Sapphire relinquished her hold on the wheel to the waiting crewman and took Brendan’s proffered arm.

For the next span of time, he proudly showed off his boat from the pleasing mix of wood paneling, off-white walls, marine-blue carpeting, bedspreads with nautical flags, to the brass fixtures.

“Our radar is state of the art. We don’t just meet Coast Guard minimums but go a bit beyond with our backup systems.”

“Because you take passengers?”

“That and the Aussie Lady is a wooden ship. There’s no metal to pick up so the radar ensures we’re seen, especially by bigger ships like the container ships.”

“Ah, I see.” She made note of the electric outlets scattered about the ship and asked why 220 volts. At first Brendan stared at them as if he’d never seen them before. For a moment Sapphire wondered if Brendan didn’t know quite how he ended up on the Aussie Lady. It was as if he was seeing the boat—this boat—for the first time. Yet he said it was his. With a slightly embarrassed tone, he told her the cabins were equipped with 220 volt outlets, due to maritime rules in effect when he refurnished the ship and because they sailed all over the world.

“Given my choice I would have gone with the original oil lamps and stove the Lady had in the nineteenth century.”

He made no apology and actually looked quite proud of the whirlpool tub/shower combination in his stateroom.

The crew, he pointed out, shared their rooms with three to a cabin. Eight passenger cabins were available for rental for a longer cruise. Proudly he described the woods of the ship including her keel of elm, the rudder from English oak, planking from keel to the bilge was American elm and topsides of teak.

Sapphire’s breath caught when they entered the main salon. “Oh, Brendan, I could get very used to this room. It’s like you visited my favourite imaginary salon and brought it to life.” Her eyes sparkled, taking in the room decorated in white and gold, and furnished with authentic looking Victorian settees, tables and a sideboard of solid teak. Mirrors and a pianoforte added to the general effect. Once again Brendan looked slightly confused, making Sapphire wonder for a moment if he knew his ship at all. With a smile, he proudly told her the decorations were originals purchased from an antique sale.

“I love your ship. I sometimes sail in Long Island Sound but those are maybe thirty-foot sailboats. Nothing like this.” Sapphire ran her hand over the top of one of the settees.

“Thirty footers are a good size, but I’m not sure I’d want to take one too far out into the ocean. I know they do for the Transpac from California to Hawaii, but I wouldn’t feel too comfortable on one in the Atlantic,” Brendan told her.

“So you call the sails and ropes the same? Sheets and lines?”

“Well I have to admit, your ship is a lot prettier than anything else I’ve ever sailed on.”

A sudden flash of lightning in the distance caught their attention through a porthole.

“That’s way out though, isn’t it? And aren’t rainstorms and all kind of normal out at sea?”

Another streak of light flashed in the sky. This one longer and more jagged than the first. Around it, dark gray clouds clustered. The waves beneath them churned a darker green, almost black just before white caps appeared in their rolling crests.

“Sapphire, this doesn’t bode well with all the passengers on board. I need to get topside.”

She took in his worried expression. “I’m sure if you tell the passengers to shelter in the middle of the deck or below in the salon we’ll all be fine, won’t we?”

“Good idea, why don’t you head on there now?” He sounded distracted, clearly focused on the boom of thunder in the distance.

“That was a loud one,” Sapphire murmured, noticing he once again hadn’t exactly answered her question.

“I’ll find you once we are back in port, Sapphire. That is, would you…I’d like to take you to dinner. If you’d care to join me.”

“I’d love to.” Relief he wasn’t dismissing her because she’d suddenly become a bore raced through her. Not that he didn’t think she wasn’t a bore, but he did ask her to dinner.

“Sapphire, the salon is that way.” Brendan pointed her in the right direction before hurrying topside to keep the ship secure.

She headed toward the salon, but stopped when through an opening in the hold she saw a long streak of lightning cut the air a foot or so from the bow. When the ship tossed her first to one side of the narrow passageway, then to the other, she grabbed hold of whatever was handy. She held on and made her way to the stairs leading up to the deck. Realizing the rail of the gangway was in her hand, she began to pull herself topside. The smoothness of the metal bannister belied the turmoil that greeted her above deck.

The waves had risen in height with white caps cresting over the deck. Green-black water rushed over the sides, rolling over anything in its path. Glasses and trays slid by on the deck. A heavy gust of wind blew across the deck, making her shiver. From the opening she watched as the sails billowed outward and then, heavy with rain water, slapped back against the mast. Two of the sheets broke loose and snapped in the wind before the crewmen were able to grab them and bring them down.

A few passengers struggled to stand, grabbing on to family members for support.

Suddenly a great gust of wind rose up, creating a cloud of gray water that momentarily blinded her, encasing the ship. Cold water chilled her to the bone. Salt clung to her lips and she shivered from head to toe.

When the torrent cleared, Sapphire looked up at the deck and saw only the crewmembers scurrying about, trying to secure anything that still lay loose on the deck. Not a passenger was to be seen. At the wheel, she saw the first mate grasping the wheel, a look of sheer determination on his face. Where was Brendan? He was nowhere to be seen, not that she had much room to look about before another wave broke over the ship, once again drenching her with the cold, salty water.

She grasped the metal railing along the short gangway when the ship practically heeled over on its side. Suddenly Brendan was at her side, yelling something about getting below. He grabbed her and held on tight. He cursed under his breath and muttered about the return of a freakish wind. Brendan steadied her and opened his mouth to call out to a passing seaman when another gust of wind exploded around them. This time one of the sails broke completely loose of its lines and it flapped loudly on the breeze. Crewmen scrambled to do his bidding.

“Hang on tight,” he shouted about the gusting winds. “Just hold on. I’m not sure it’s safe to try to make it to the salon right now.”

Brendan looked toward the wheel and nodded at the mate now preparing to bring the Aussie Lady about. The boat pitched first heavily to the starboard and then, just as rapidly to the port side. Water rushed across the deck in a gray-green torrent. Still not one of the passengers could be seen in the heavy gray mist.

“W-what’s happening?” The water plastered the lightweight lace dress to her. Soaked to the skin, movement became increasingly difficult, especially when her boots became sodden.

“It appears an unannounced storm is blowing in. I can’t get you to a safer place right now so hold on,” Brendan yelled over the wind.

The ship rolled side to side, tossed about like a toy. Above them, the sky darkened like night.

“My crew will see to them. There’s no way I can help you get to them now. Can you find your way below? I need to take the wheel.”

A clap of thunder rolled over them, the waves churned to a deep teal green, with turbulent white caps rushing over the mounds of water. Panicked about what was happening, Sapphire bolted the moment Brendan relaxed his grip. As if from a distance, she heard him yell her name. She turned to assure him she was all right.

The boom broke from the mast and knocked her to the ground.