Scars of the Heart

Adrian Templeton scarred physically and emotionally, craves to live a normal life away from his domineering and somewhat hateful mother. After accepting a job offer, he meets Ellen Gerber a woman with considerable years age difference.

Can Adrian and Ellen rise above judgmental people and society's criticism to live a fulfilled and happy life together?

Filled with drama, suspense and God's infinite wisdom and love, follow their trials and tribulations.

Will ending it all be the answer or will Ellen find a way to track Adrian down after his disappearance. 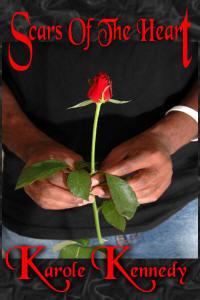 Scars of the Heart

His dark, shoulder-blade length hair clung to the side of his face and rain-drenched shirt. The deluge, illuminated by the streetlight, fell in torrents and the biting wind howled around the corner of the industrial brick building. Adrian Templeton turned his scarred face to the light, the skin surrounding his dark-brown eyes creased against the wild weather. He screamed into the blackness of the night, "Why can't anything go right in this horrible world?" He held the railing that kept him from falling into the swell of the stormy water and gripped it until his knuckles turned white, his nails biting into the flesh on his hands. "I can't cope with life anymore!"

His body shuddered when the familiar lilting voice floated up from the water below. His lover's face floated under the surface beckoning to him, alluring him to join her in her watery grave.

He held his hands over his ears and bent over, crying out, "No! No. Leave me alone! You're dead!"

From the recess of his mind, he heard banging. It intermingled with the storm in his nightmare.

"Adrian! Are you awake?"

With a guttural gasp, he sat bolt upright, his breathing laboured and his heart palpitating. He swallowed hard, rubbed his face and answered his mother.

"Do you have to bang the door down?"

"Get up. You're going to be late for work. Your bus is in thirty-minutes."

Adrian lay back and tried to squash the memories of the nightmare that frequented his dreams and chilled him to the bone. He looked at the nail indents in his hands and sighed.

Footsteps stopped outside his door once again. "Adrian! Are you up yet?"

Groaning, he clambered out of bed, and hugging his arms around his chest against the cold, walked to the door and flung it open.

His mother dressed in an old floral cotton dress and towelling apron, inhaled on her cigarette, "Hmm, what's wrong with you? Another nightmare?" She pushed past him to go about her morning duties.

"Oh, Adrian, You've knocked everything off your night table again. You've tipped your glass of water in the bed! Look at you, your hair, and bedding are all wet."

"Mum, please, I'm twenty-six years old. Stop fussing." Irritation wrangled through him. "Don't worry, I will fix it up when I get home from work, and yes, I had another nightmare. And please, get that cigarette out of my room." He bit back the anger and frustration at his mother's meddling as she sighed while stripping the bed, her cigarette dangling from her mouth. She'd never treated him like an adult since the accident. I've got to get a place of my own!

"Mum." He yelled, exasperated. He took a deep breath, and his voice softened. "It's okay, I will fix it. Now, can I get dressed? I'm going to be late. The boss is the last thing I need breathing down my neck. Remember, no job means no money. That means no food."

His mother placed her hands on her hips and stared at him with a look of disdain. "How are you going to cope out in the world?"

He laughed sardonically. "Quite easily, I can assure you. Now, stress less. Go and let me get ready."

"I doubt that, and hurry up. You're late again."

I wonder why! Adrian threw his hands up in exasperation after his mother had flounced out of the room, slamming the door behind her.

He glanced at the clock. Ten minutes 'til the bus arrives. I won't have time for a shower or breakfast! He scrambled into his jeans, and while doing his buttons up on his shirt, wiggled his feet into his shoes. Grabbing his comb and wallet from the dresser, he put the wallet in his mouth, combed his hair, and then yelled a muffled goodbye.