Scheming and Dreaming in Los Angeles

Tess MacIntosh is 29, a professional R&B singer in a nightclub in Los Angeles, owned by her fifty-something fiance, Porter Hunt. She’s as cynical and as hardnosed as Porter, due to her own difficult childhood, and is marrying Porter for his money and connections. Porter, in turn, is one of those middle-aged men whose wealth and power in his little world make him feel invincible and entitled to any beautiful woman he wants. Tess’s good friend and once teenage crush, Aaron Peterson, a musician and composer with dreams of seeing one of his musical plays on Broadway, needs her to join him for a cruise gig. He’s loved Tess since he was nineteen and she was sixteen. He sees this cruise gig as his last chance to win her over before she takes a path in life that he’s convinced will lead to misery. So which path will Tess choose? Millions of dollars if she marries Porter? Or Aaron’s love and Broadway dreams? 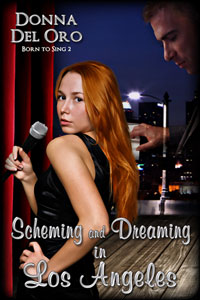 Scheming and Dreaming in Los Angeles

Tess took a deep breath as she strode to the little covered porch of the thirties-era bungalow in Torrance Aaron rented from his parents, now retired and living in San Diego. She’d left her car a mile away at the park alongside one of the local public beaches. That way, she’d be forced to do the daily exercise jog to maintain her size-eight figure on her five-nine frame. Plus, the cardio was good for her lungs. Sinatra used to swim a couple of miles every day, it is said, to keep up his stamina and lung power. Breathing was an important part of singing. If it was good enough for ol’ blue eyes, it was good enough for her.

A bold, prolonged knocking prompted noises inside. Moments later, cobalt-blue eyes stared back at her through the peephole. Then she heard a loudly muttered, “Shit!”

“I heard that, Skin! What’re you complaining about? It’s almost nine. You can’t sleep all morning. We’ve got a lot of work to do.”

Tess was an early riser—had been all her life—so nine on a Sunday morning was halfway to lunch time for her.

“C’mon! The cruise starts Tuesday and we haven’t even gone over our sets yet.”

“Whose fault is that? I’m surprised you didn’t bug out at the last minute—”

The door opened just as Tess cocked her foot, ready to kick it.

“Well, how’s that for gratitude? You know damned well when I give my word, I never back out. I just haven’t had time to practice.”

A tousled, thirty-two-year-old man stood aside and ushered her in with the bleary anger of a teenaged boy. Aaron’s dark blond hair stuck out about his head in skewed angles and peaks like a crazy crown. He was rubbing his left eye with one hand as the other hand yanked up the waist of a sagging pair of gray sweat pants. Not for the first time, Tess observed the developed pecs and washboard abs with detachment. When Aaron wasn’t tinkling the ivories—as Porter put it—he was working out. He said the daily physical workouts sparked his creativity, something she could understand. The mind and body were always linked.

Aaron was tanned, muscular and fit. Long gone were the skinny, gangly arms and bony legs protruding from a waif-thin torso. Skinny—or Skin—had filled out nicely since the age of thirteen, he’d moved from England to Southern California with his parents, a film editor and a set designer. The Petersons had moved into the neighborhood on the middle-class side of Torrance, a town about five miles south of Los Angeles International Airport, or LAX. Because Mac and Aaron had become instant best buddies, Monique and Brad Peterson had welcomed the big, good-natured young teenage boy into their family along with his red-haired, sullen little sister. Taking pity on two raggedy, neglected foster kids, the Petersons had practically adopted them. Aaron’s parents were the only normal, middle-class people Tess and Mac knew at the time. The only people who sat down to a home cooked meal every night and actually spoke civilly to each other. Their succession of foster parents sure didn’t. If they could’ve—if they hadn’t been stuck in the Child Protective Services system—she and Mac would’ve moved in with the Petersons. As it was, they spent every chance they could at their house, the little bungalow that Aaron now rented from his parents. For Tess, the small house evoked a lot of warm, cozy memories and emotions.

“Well, bloody hell. I was just joking, Red. I knew you’d come through for me and I know you’ve been busy with wedding plans. And that old man you call your fiancé. Look, I gotta get dressed.”

Ignoring his wisecrack and overcome with relief and joy at seeing him, Tess flung herself at him and hugged him tightly. “I missed you, Skin. Why haven’t you called more often?” She had to admit, it was so good feeling his hard body pressed against hers. His body was warm from bed…and carried a faint whiff of perfume or cologne.

“No, I mean, more often. To get together and…go to a club or something.”

“Didn’t want to intrude on your…advantageous little arrangement.” His sarcasm wasn’t lost on her, but she said nothing. Aaron eased away, turned and began picking up strewn clothes from the floor of his handkerchief-size living room. Two of the items were a woman’s white bra and panties. Uh oh…she’d interrupted something.

“Oops,” she remarked, “I didn’t know you had company. You want me to come back in an hour? I’ll run down to the beach and back.” She dropped her heavy music satchel on the floor. “Just don’t let her touch it. I mean it. Upon pain of death.”

That stopped Aaron in his tracks. He scrubbed his face wearily. The sheepish smile he shot her gave her a glimpse of the old Skin, always awkward and a little shy with girls. Occasionally, even with Tess.

“Yeah, Red, good idea. I gotta clean up and…y’know, nudge her—” he hooked a thumb in the direction of his bedroom—”gently out the door.”

“New girlfriend?” Her frank look of irony met Aaron’s dark blue gaze before he averted his eyes. He bunched up the clothes and held them in front of him.

“Hmm, not really,” he whispered, pressing a forefinger to his lips. His handsome, boyish face broke into a grin as though he was always astonished that women would find him desirable. “I met her at a party last week. A posh affair in Bel Air. I played, she catered. We kinda clicked.”

Skin went through girls like a rock star through groupies. His good looks, buff bod and English-accented charm drew them in like bears to a honey pot. Then he invariably grew bored, ditched them and went on to new conquests.