Carrrie Sinclair's had it with long time love, Jack Jones. That is until he makes her an offer she can't refuse and asks her to meet him in Vegas for a last-minute wedding. This is what she always wanted in her mind and thought would never happen, but shortly after the nuptials, Carrie discovers you can know someone for years and not know them at all. Jack has a secret he's been keeping and now that they're married, he can't hide it any longer. 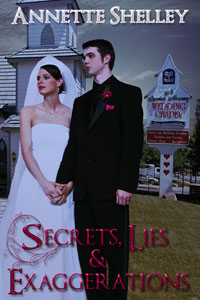 "This is the kitchen…and the living room." The living area looked manlier with dark wood paneling and beige carpet. David pulled me to the couch and put his arm around me. Wasting no time, he moved his lips over mine, explored the interior of my mouth with his tongue.

He was a wonderful kisser. I instinctively pressed my body against his, felt the heat of his chest against me.

That reaction triggered his hands to slowly move up my thighs to the edges of my sweater. I could've stopped him, but I didn't want to. It felt so good to be touched again.

His eager wandering fingers crawled under my sweater, and rubbed my stomach through the fabric of my t-shirt underneath.

I moaned my approval, which gave him the cue to try more.

His hands wandered up to my bra and he gave me a gentle squeeze. Part of me wanted to stop him, but the other part of me knew I didn't want to.

The conflict was easily won. I ran my hand under his sweatshirt through the hair on his chest in response. He smelled so good. My tongue explored his mouth more eagerly than before.

David slid his hand to my bare skin, quickly made his way to the center clasp of my bra and released it in one motion. He tweaked my nipples in his fingers while I leaned back and uttered a deep groan of approval.

Both his hands aggressively brushed over my hips. David powerfully removed my sweater and t-shirt. My bra tumbled to the floor.

I glanced around, realized I was bare-chested in his living room and recognized he was one up on me. I needed to get to work and get him undressed. I pulled off his sweatshirt and we pressed our skin to each other, kissed, groped, moaned out in pleasure while we rolled around on his ex-wife's coral carpet.

Fortunately I was way too aroused to really think about that.

David stood and pulled me to my feet, wrapped his strong arms around me and carried me to the back of the house into the far bedroom. A king sized bed sat against the far left hand wall.

On the bed and on my back, I looked up at David who immediately reached down and unbuttoned my jeans. He unzipped me and pulled them by the ankles to the floor, opened my legs with his hands, pressed his hot body against mine. For the first time in the two years I'd known him, I saw and felt the benefits of his workout.

Strong biceps pinned me down, his mid-section thrust against me through his clothes. He leaned in for a kiss and my hands escaped to his jeans where I immediately unbuttoned him and pulled his pants down as far as I could before he helped. A split second later, we were bare, except for our underwear.

His teeth found their way to my panties and pulled them down to my knees. I kicked them to the floor, reached for his briefs with my right foot.

My palms ran over his smooth back and rested on his ass. I enjoyed the roundness of his buttocks, the weight of his torso against me.