Born of a succubus and fathered by a man, Rurik will do anything to be a true demon and be accepted in the lower reaches of Hell. When his mother comes to him on the seventh night—the night when all demons fly to the living world to wreak havoc—he is excited about his assignment to defile a woman. He goes forth with high hopes, having been taught how to seduce and anxious to test his training. But when he catches sight of a beautiful woman suffering a nightmare in her bed, he is easily distracted. Her pliant body responds to his tempting touch. Her mind allows him in. He finds himself wanting her instead of the woman he has been assigned to defile. 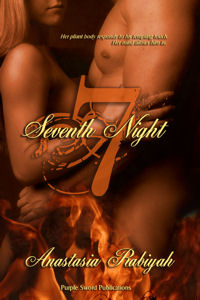 She didn’t answer him, and he feared she might ignore him as the abbess did until he heard her sobbing. She trembled in his arms, giving him an odd sense of strength. Never had he held a woman like this. He carried her to a sprawling garden and landed among a stand of melons. There he steadied her against his chest and enfolded her in his leathery wings.

Her wet tears stained his bare chest. Small, delicate fingers latched on to his waist while she continued to cry. Puzzled, he buried his nose in her hair and breathed in the scent of her. He remembered the flavor of her soul and longed to taste it again.

He shrugged. Because I want to seduce you hardly seemed an appropriate answer. Her sadness troubled him. He didn’t like it at all. A torrid night of passion and sex sounded much better than saving a nun from killing herself. He looked out over the gardens at the church and decided he didn’t like Durbin at all.

She blubbered and sniffled, unable to explain.

Frustrated, he pulled her with him to sit among the dew-dappled leaves and cantaloupes. She curled into his lap and clutched him. After her tears abated, Abigail raised her chin and stared at him. “I dreamed of you.”

An unsettling desire wove through his middle. Heat bubbled inside him, and he felt the beginnings of arousal pressing at his sex. “Yes, seven days ago.” Rurik grinned in a devilish way. “Did you like that dream?”

She lifted a hand to wipe away the tears from her cheeks. Her eyes scanned him, taking in his face, his shape, and catching on the edge of his left wing. “Oh, God, what are you?” She struggled to escape him, but he held her fast, shocked by her reaction.

But she broke free and bolted. He stood staring as she tried to run away through the rows and vines. Soon her feet caught and she stumbled, crashing to the ground in a heap of soiled nightdress. The scent of smashed cantaloupe permeated the air. He licked his lips, hungry for something other than a soul. In nine long strides he stopped beside her and knelt to lift her. His wings melted away before she stood. Rurik flashed a charming smile.

She shook her head. “You had wings, dark demon wings. I’m dead...in Hell.”

He shook his head and picked a leaf from her hair. “No, you’re imagining things, dreaming.” He pushed his mind into hers and tried to allay her panicked fear. Nodding toward the building she’d tumbled from, he said, “Your body is asleep in your bed. You have nothing to fear from me.”

He shushed her with two fingers to her lips. The velvet of her skin heated him once more. He wanted this human woman, and decided tonight he would take what he wanted. Her wide green eyes calmed. “Let’s go back to your bed. I’ll hold you there. Would you like that?”

Her eyebrows tensed. She closed her eyes, shutting him out. Then the woman fell forward, fainting against him. Rurik heaved her over his shoulder and carried her back toward the chapel and the prospect of coupling in her bed before the sun rose.