Travel on a journey to new places and sexual experiences with the Sex in the City series of destination erotica from Xcite Books. Each volume contains three stories that take you to the heart and soul of the city, its places, people and lovers.

The SEX IN THE CITY series is devoted to the unique attraction that major cities worldwide provide to lovers of all things erotic. Famous places and monuments, legendary streets and avenues, unforgettable landmarks all conjugate with our memories of loves past and present, requited and unrequited, to form a map of the heart like no other. Brief encounters, long-lasting affairs and relationships, the glimpse of a face, of hidden flesh, eyes in a crowd, everything about cities can be sexy, naughty, provocative, dangerous and exciting. Cities are not just about monuments and museums and iconic places, they are also about people at love and play in unique surroundings. With this in mind, these anthologies of erotica will imaginatively explore the secret stories of famous cities and bring them to life, by unveiling passion and love, lust and sadness, glittering flesh and sexual temptation, the art of love and a unique sense of place. And we thought it would be a good idea to invite some of the best writers not only of erotica, but also from the mainstream and even the crime and mystery field, to offer us specially written new stories about the hidden side of some of our favourite cities, to reveal what happens behind closed doors (and sometimes even in public). And they have delivered in trumps. The stories you are about to read cover the whole spectrum from young love to forbidden love and every sexual variation in between. Funny, harrowing, touching, sad, joyful, every human emotion is present and how could it not be when sex and the delights of love are evoked so skilfully? 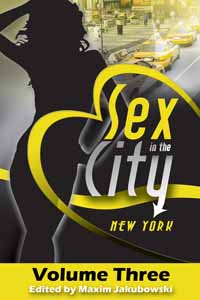 Sophia added you as a Friend.
Sophia who? A photo, above a name, showed a sun-kissed female face framed by fine blonde hair. Large blue eyes stared from my screen. ‘Remember me?’ a message asked. ‘I used to go out with Caz Theopholos?’ My late friend, Caz. That Sophia? Yes. Yes, I remembered her.
‘How long has it been since we saw each other?’ I asked in reply. ‘Ten years?’
She wrote back: ‘Thirteen, I think.’
Sophia, my new friend who was hardly ‘new’. Her name, her photo, her contact, stirred me. The more I thought of her, the more stirred I was, stirred even as her contact salted the wound of losing Caz. I rifled through boxes for traces of Sophia from back then and found an old favourite photo: Sophia and my ex-wife, in their early twenties, posed side by side, in little black dresses, taken at the first wedding that Caz and I had attended. What struck me about the photo, and probably why I kept it, was how immature my ex-wife seemed standing next to Sophia, who, lithe, long-legged, was seated with her legs neatly crossed, her posture upright on an oversized sofa, and was gazing into a somewhere else that only she knew, far out of the photo’s frame, into a future that was maybe here.
Sophia. Sophia and Caz. The loss of Caz shadowed my life. Over two decades ago, when his parents divorced, he had moved from Astoria, Queens to The Bronx, where he and I became virtual brothers. We snuck our first beers together. Took clandestine subway trips during the city’s wild west high crime days. We’d learned about sex by swapping favourite porn magazines. He preferred Playboy and brunettes; I favoured Penthouse and redheads.
At eighteen, Caz fell in love with Sophia. We went to bachelor parties and our friends’ weddings. At twenty, he broke up with Sophia. He and I travelled cross-country.
At twenty-three, he got back with Sophia. We got shitty jobs and then we got better and better jobs. At twenty-five, he broke up with Sophia for the last time. We tried, and failed, to stay in grad school. In our thirties, I got married. And then divorced. With Caz’s help, I got back on my feet again. I started dating. Then, as soon as my own life had traction, he was diagnosed with pancreatic cancer. “Six months,” the doctors told him. There’s fate; and then there’s fate. Caz lived exactly one year from the day of his diagnosis. Dead at thirty-five. During his final weeks, his ex-girlfriends, mostly blondes, flocked to his bedside. Their expressions stupefied by regret, eyes heavy with unspoken laments for lost opportunities, they stared at him, mourning without quite mourning, like ancient Greek lovers who have arrived too late for one final bacchanal with their dying god.
Sophia. Half Greek, and, if I remembered right, half Dutch. Sophia, from the Greek word for wisdom. I recalled from my college days when I studied philosophy that Socrates supposedly said that ‘Nothing is preferred above justice.’ But there is no justice. The good die young. Miserable bastards live to be a hundred. This is true in Astoria, that manic Greek-American neighbourhood in Queens, where ole Socrates would have felt at home, and it’s true everywhere else in this manic world. But if there’s no justice, there is erotic consolation. The ancient Greeks knew about erotic consolation. Sophia. Yes, oh, the consolation. I felt an erotic frisson seeing Sophia’s name in my inbox. She wrote now and then. She explained to me how, two years after she broke up with Caz, she married ‘a mistake’. She had twins with this mistake. She and the mistake had moved to a gated community in South Carolina, etc. Etc. When she heard Caz was dying, she wanted to come up to New York, visit him one last time. ‘But my girls needed me here,’ she wrote to me, as if she were also apologizing to Caz. When she spoke to him on the phone from his hospital bed, he encouraged her to get a divorce from ‘the mistake’. ‘Life is not short,’ he’d told her. ‘It’s less than short. Live your life.’
After Caz died, she took that carpe diem seriously. Now she was remarried to a man who, judging from her homepage, looked stable, Southern, suburban. Her words suggested she was bored, comfortable, wistful. She confessed that she thinks of Caz, ‘Every single day.’ She elaborated on the theme only once. ‘Whenever I see the New York City skyline on a TV show, I think of Caz.’
Our e-mails kept up for several months like this, so it was karmic and unsurprising when Sophia e-mailed that she was coming to New York, visiting some cousin whose house in Queens had just been bought up by a developer. ‘Might you be around?’ she wrote. ‘Dinner?’
Yes, I told her, I would be around. I even mimicked her laconic style. ‘Yes, dinner.’