Ever consider how actions of others ripple out and shadow your path, what you are, what you’ll become? Sean Paterson ponders the cruelty in his life as he’s forced to carry the scars of hate. Detective Christine Sheppy is tormented by the misery of those cast aside and guilt from a desperate act of survival. Two people, haunted by deeds that pierce their conscience, are brought together by the tragedy of a stranger. Their isolated lives are chaotically entwined, until together they solve the mystery behind why a teenager and her child have become targets. The truth carries a sweet and bitter lesson: To each crossing of paths, there is a reason, a purpose. They become the salvation to each other’s dark past, but at a price. They most choice how far they’ll go to end the reign of sorrow inflicted on the helpless by powerful men void of conscience. 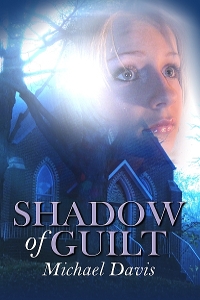 Megan wiped the rain from her eyes and looked again to make sure. A stained glass door sat below an archway with something etched along the top. The words were eroded, as if forgotten by would be visitors, but she still grasped their meaning; Welcome to God’s Temple.

A church, here, hidden from the public, as if the other buildings had caused it to wither away, obstructed from the view of potential sinners. But Megan saw something other than a neglected temple. The word asylum flashed in her mind. Not even his demons would dare harm her on hallowed ground.

She knew this image, the colored glass and polished cross, from when she was a child. Each Sunday, her mother would dress her up and they would spend a wonderful hour surrounded by beautiful people singing songs with words she didn’t understand, but the sounds were still pleasant, filled with joy. Afterward, mother would take her to the bakery with its wonderful smells. They would sit, have a pastry and listen to the laughter of other children, parents chatting, families enjoying life. That was before they forced her mother away to that sanitary place with white rooms and barred windows.

Megan walked up the crumbling steps and pulled at the tarnished brass handle. She entered the pristine chapel with worn, but clean red cushioned pews. The odor of rotting garbage and water soaked cardboard from outside was replaced with the scent of burning candles, and something else out of place, like pine trees. The interior was simple but broadcast a message of welcome, the promise of a better existence. She raised her head and focused on the statue above the altar, the man anchored to a cross, the same image from her childhood when Megan would rest on soft cushions and pray with her mother.

Megan stepped to the platform, but hesitated. She turned and glanced over her shoulder. She was alone, safe, at least for the moment. She knelt onto the long crimson colored pillows, placed the bag from the second hand store by her side, and waited. She was confused at what to do. Finally Megan bowed her head and did what seemed natural for this sacred place. She asked for guidance, an explanation to help her fathom the events in her young life.

Why this path? What am I to do? I don’t understand what to do? There has to be a way to get out of this, to protect Amy, have a real life for myself and my daughter. Please help me find him; guide me to find him before it’s too late. I know he’s out there, I know he’ll help. He must be told the truth about us, who we are, that we exist and are connected. He’s the only one we can trust, that will truly love us, no matter what I was forced to do.

Megan felt a presence, someone looking down, waiting for her. She tried to rise up, but a soft hand pressed gently on her shoulder.

A thin man dressed in black promised, “It’s alright, my Child. I didn’t mean to interrupt. Continue your prayer.”

His dark wrinkled face was drawn, obviously from years of struggling against harsh means. Yet his eyes conveyed internal peace and warmth.

“I’m sorry. I wasn’t trying to take anything. I was just…”

“I understand.” He waved his hand in a semi-circle around the empty building. “Not many come anymore, but that’s why we’re here, to help you reach out when you need Him.”

He glimpsed at the man on the cross and talked to the statue. “I wish there were more like you that seek His guidance, His love. But today, people don’t seem to have the time until it’s toward the end. Our means here are meager, but this house of God is still for you. Take your time. If you need me, I’ll be seated in the first pew.”

The black man with the scrubby beard removed the bible from the pulpit and started to turn away.

“Reverend, do you ever wonder about…”

The skinny man of God with dark brown eyes turned back. “Wonder what, my Child?”

“That He’s really listening, that He watches over us?”

The man offered an indulgent smile, as if that same question had been put forth many times in search of His wisdom. “Once, in the beginning before I became His shepherd, I pondered that same question, but not anymore.”

“He doesn’t talk to us like the words we’re sharing, but He reaches into your spirit and let’s you know He’s present watching over each of us.” Then he sat down next to her and again smiled, but this time his visage was sad, as if he were preparing for the next question, the one that always followed.

In a low trembling tone just above a whisper, Megan issued her profound confusion; the same enigma so many helpless souls pondered. “Then why does He allow so much pain for those that have done no wrong? Why must the weak be at the mercy of the powerful?”

He leaned backward, as if taken off guard by the reflective thoughts of one so young. He searched for what she needed, the words that would make her understand the truth; the sad but profound reality of this theological paradox.

“It is part of His plan to help each of His children seek out the...”

His response was broken by the sound of rain and wind whipping through the entryway. The only two people in the church turned toward the outline of a large figure standing just outside the light of the doorway.

Megan jumped up as if struck by a new found energy. No, as if her instinct to survive above all else had taken over. “No!”