Shadow of the Blue Ridge

Despite having traveled all over the world in the last fifty years, with extended residences in Japan, Thailand, and Cyprus, the author of this anthology kept coming back, in person and imagination, to the Blue Ridge Mountains of Virginia. He met his wife in Charlottesville, where they both attended the University of Virginia, and then, although drifting off in foreign service assignments with the U.S. government, the couple didn’t leave central Virginia before buying their own slice of paradise in the Piedmont foothills of the Blue Ridge and returning to the region again and again until finally retiring there.

The twenty-six stories in this collection, written over a fifteen-year period, are all set within sight of this range of mountains, located on either side of the mountain chain, and extending from Front Royal in the north to Roanoke in the south. Most have won or placed in regional prose contests or are extracted from published anthologies. All were written with the presence of the Blue Ridge Mountains very much in mind. 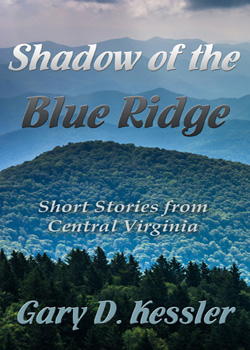 Shadow of the Blue Ridge

From “Fire on Ice”

I’ll never forget the smell of varnished old pine. It will forever conjure up what the sheriff said when he thought I was asleep—or I certainly hope he thought I was asleep. I was curled up on the floor of the visitor’s center, exhausted and unable to sleep I was so keyed up. At the same time I had my eyes scrunched closed, trying to shut out reality and providing an excuse not to be here, the last place I wanted to be.

Ed Peters was perched on a straight chair over near the center’s book rack, the essence of a rumbling volcano, ready to erupt at the slightest excuse. His eyes were boring into me. His wife was ineffectually fluttering around, trying to be domestic with no means to do so or anyone interested in being thus served—but obviously trying to maintain a claw hold on her role in life.

I had sent Al and Travis down the mountain with the remaining scouts—the ones whose parents hadn’t already driven up here and snatched them away. They would make sure the boys got home, with explanations—sort of a hollow gesture of responsibility, I painfully knew. And afterward Travis would try to find Doug’s parents. I didn’t envy him that.

I knew we’d already been on the 11:00 p.m. news. By then there were two film crews up here and both did live segments. They wanted me on film, but the sheriff in charge insisted that only he be interviewed—and that was fine with me. I never could understand how the relatives of the victimized or lost could speak on camera. I knew I wouldn’t do more than cry. And that certainly would bolster everyone’s confidence.

I must assume the sheriff thought I was asleep when he turned to a colleague of one of the other counties and said, sotto voce, out of Ed Peters’ hearing, “It’s almost 3:00 a.m. It’s getting too dangerous out there. It’s time to turn off the search for tonight and come back tomorrow to look for the bodies.”

I section my life into two segments—the years before I heard that statement, which was a period in my life that I only thought I endured problems and grief but that really were the innocent years, and all of the years after I heard the sheriff say that, when I knew how precious and fleeting life and happiness were. I felt a fist grip my heart and squeeze, and I could barely breathe. Even my moan was too strangled to be heard.

I was rent asunder. Emotionally I knew that I should reach out in concern for the parents of Shawn and Doug, but in those moments I was so overwhelmed with the terror and grief of this sentence so casually and callously inflicted on my own son—all because of what I had failed to do—that I could think of no one but my own Paul. I even, I am mortified to think, resented Ed Peters at that moment. He had more time than I did. Maybe merely moments before he realized that the sheriff was shutting down the operation. But precious moments of innocence and hope that I no longer had.

I closed my eyes even tighter, willing them all to leave. All of them just to pack up and drive off, knowing that as soon as I was alone, I would bundle up once more and be out on that trail. I knew what that inevitably meant. And in my grief and frustration and deep sense of guilt, I embraced it.