Journey to the cursed, desert city of Kaladia where Shahzar, heir to the throne, faces an arcane rite to attain her position as Queen. She must bear a child sired by the failing Shan-Sei Temple's bishop. Raised by her cold but caring uncle, the city's Captain of the Guards, she has learned to shut off her emotions and is well versed in the ways of battle. When the bishop is sent to her bed, will this descendant of an infamous necromancer allow him to live, or will she adhere to her uncle's wishes and murder him? 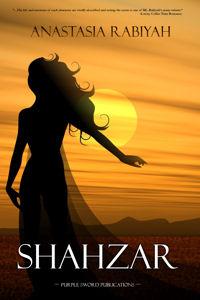 "...This desert fantasy is (an) exciting journey in the life of Shahzar. The characters in this story draw you into their world. Shahzar's determination to better the lives of her people is her greatest strength. Whereas Raynier gives love and support to Shahzar knowing that laws that do not allow her to reciprocate bind her. They are both courageous in their own way, and offer each other a haven amongst the chaos..."

"Tomorrow," he managed, struggling for breath beneath her, "you'll go into that castle and never come back out. They'll make you sit by the fire and sew, growing fat and lazy with all their pomp."

"I'll be queen, and when I am, things will change," she spat as she seized his wrist and pressed it to the dusty earth. His other hand remained trapped between their bodies.

"You're a woman; you can't change things," he rasped. Irlecain seemed to like irritating her. He grinned and chuckled when she glared down at him.

Shahzar frowned, fury taking over. She pulled her dagger, and laid the blade against his forehead. "What did you say?"

"You heard me," he huffed, no fear shining back from his green eyes.

Her hand trembled then swiped. Shahzar pushed away from Irlecain, still glaring. Blood ran down the side of his face as he rose. Startled, he reached up and blotted at the injury. "Why did you do that?" he cried out.

"To teach you your place. The place of second, an underling to me."

"I thought we were friends, Shahzar." He pushed his palm against the cut and winced. "After all the times I stood by you against the raiders, all the times I told Sadot you really were a girl, not a boy with long hair." He chuckled again, still shocked, but taking the moment well. "What kind of person cuts her friend's face?"

Irlecain's insults were not unusual, but she felt edgy and impatient. "You deserved it. You know better than to push me." She wiped the dagger on her gray pants and pursed her lips.

Irlecain smiled wide, an expression that charmed most. "I'll miss you after today," he offered.

She returned his cocky grin. "You'll see me. If you outlive the raids, you may be Captain of the Guards one day." The princess paused as the bells announced the evening meal. Soldiers languishing by the barracks soon rushed past to make their way to the dining hall. The scent of roast lamb and turmeric wafted on the cool, desert breeze. "When Shahmi retires, that is."

"Shahmi will never retire. He'll spend his last hours in battle and so will I." Irlecain puffed out his chest, already too proud of his rank in the foot-soldiers. He grinned wider, bending to retrieve his scimitar and slide it back into its scabbard.

Their hands met, fingers curling around each other and they shook them together, a strange farewell for the two friends. After that night, she'd begin her journey to take the throne and fight for the power the council had taken. Irlecain, the best tracker in the army, would begin his training as an assassin and a spy. "You'll write to me from Bisura?"

"Every week." He smirked and held fast to her hand. "You should come with me. You're meant to kill, not sit on a throne." He nodded at the castle. "They wouldn't miss you."

"I don't think assassin's training will improve my methods." Shahzar pulled her hand away from his, frowning. She did want to go with him, for his company more than anything else. Irlecain matched her when they fought. They'd become a team, almost inseparable. It saddened her to part from him. "You write to me, and when you're done with your training, there's something I want you to find."