Alex Holden, a forty-one-year-old body builder and gym owner, and Terry Duncan, a twenty-seven-year-old musical theater dancer, have been a committed, cohabiting couple in San Diego for eight years. They still consider themselves a committed couple and have no wish to change their arrangement or upset their partner. But, although they go through the routines of servicing each other, the spark of what once had been a bonfire relationship now seems to ignite between them only when the U.S. naval fleet is in for shore leave. Neither of them speak of the correlation between those two conditions, but each holds a secret on what it means to them for the fleet to be in for shore leave. 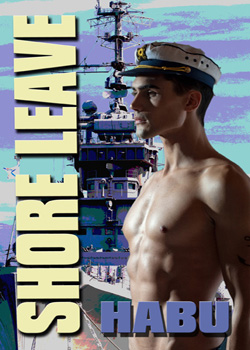 “Your turn in the shower,” Terry sang out, as he came out of the bathroom, patting at his toned little body with a towel. “Breakfast in twenty minutes.”

At the breakfast table in front of a full-length window overlooking San Diego Harbor, it was Terry’s turn to scan the LGBT Weekly, although no coffee for him. He was drinking orange juice and spooning wheat germ somethingorother from a bowl. Terry was a vegan and Alex was a carnivore. Terry did the cooking, though, and Alex was snarfing up three fired eggs and four link sausages.

“The fleet’s in,” Alex said to Terry’s newspaper.

“Is it?” Terry answered from behind his paper. “Yeah, I think I read something about that in last week’s paper.”

“You can see them lined up out there beyond Coronado. Tenders are already out there to bring sailors in for shore leave.”

“City will be busy,” Terry answered.

“You remember that I go up to LA for a meeting today. I’ll be back tomorrow, maybe late.”

“We get better mileage on the Rav 4,” Terry said, lowering his paper to give Alex a pointed look. The red Corvette convertible was a bit of a bone of contention between the two of them. Terry had made the mistake of saying that Alex wanted them to get it just because he was feeling old. The topic of getting old didn’t go over well with Alex these days—especially when Terry combined that with the remark that Alex seemed to be slowing down on the sex. The more practical and economical of the two, Terry, had balked a bit about having a maintenance-demanding sports car in downtown San Diego. They both were busy and barely went out of town. It seemed like Alex went to LA whenever the fleet was in, though. Terry couldn’t say much about expense, though. He didn’t make much at the theater. Alex was the sugar daddy here. Once reason they’d lasted for eight years probably was because Terry recognized that and was the economical one.

“The Corvette needs to open up its jets. It needs the highway workout.”

“Whatever,” Terry answered. “Since you’re gone overnight, I may just stay at the theater tonight. We’re putting in the lights for Guys and Dolls and we’re short on time on that. They need my help and it’s got to be finished by tomorrow night.”

“Leave your dishes. I’ll take care of them,” Terry said, adding, like always, under his breath. But he didn’t feel in a bitchy mood, so he didn’t say it, as he sometimes did. Alex treated him like a wife of eight years. But Alex had given him the cock today, and Terry was keyed up in anticipation of a special day anyway. And it was Friday. And the fleet was in.