Show Me The Love

Show Me The Love by Landon Dixon

Jerry believes that Marion is the girl for him; the girl for keeps. However, before he can confirm his feelings he decides to expose Marion to his deepest and most secret desire. In an impromptu venting of his simmering lust, Jerry reveals to Marion his true passion. Once out of the bag, Jerry opens a Pandora’s Box containing each of their fiery and repressed urges, urges that even he must be forced to taste.

When Carla decides to visit the local snooker hall, her sultry and seductive entrance makes her the centre of attention. Very soon, her snooker skills are not the only things being displayed on the green baize for the attention of her willing audience. However, breaking the club code of etiquette is not taken lightly at this institution, resulting in Carla receiving disciplinary action at the dominating hands of the Manager.

Rescue Me by Jean-Philippe Aubourg

Gareth loves to boast about his liaisons with willing online submissives. Jill believes Gareth should get out into the real world to escape his overactive imagination. When an email arrives recounting his latest conquest, Jill decides to meet with Gareth to voice her concerns, particularly the humiliating treatment of his women. When Gareth challenges Jill to convert one of these women, Jill soon discovers the world of cyber fetishism and the mysterious fiona31, an experience that challenges her prejudices to the core.

Slipping into an up market lingerie shop just before closing time, a handsome customer peruses the racks of racy garments. Intrigued by her last-minute customer, the shop assistant offers her assistance in helping him make a decision. Finding out who the items are intended for, the assistant’s roving eye soon results in a little personal attention to detail that leaves her customer more than satisfied and herself glowing in a job well done.

Let The Punishment Fit The Crime by Chloe Devlin

How does a master punish his slave-girl for trying to manipulate him? This master dispenses a punishment that drives his deviant servant wild: denial. Restrained and blindfolded his disobedient minion is forced to listen, as the punishment she craves is meted out to another. Driven wild by her enforced banishment, a heady brew of lust, jealousy and withdrawal propel her towards a climactic need for forgiveness and redemption, and a need to prove to her master that her lesson has been truly learnt. 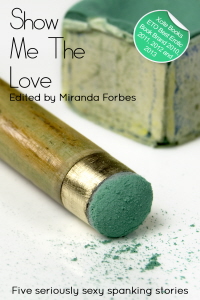 Show Me The Love

Jerry had been going out with Marion for a month when he decided to get really acquainted with her ass. He’d been first attracted to the petite, brown-haired, brown-eyed beauty by her big, round, fleshy backside, and now he wanted, needed to fully explore it – flail and fuck it, if possible.
He was concerned, though, about how she’d react when confronted/rear-ended with the full extent of his overwhelming butt fetish. He’d been careful with her so far – sex in all the conventional positions and orifices – because he was already thinking that maybe she was the ‘one’; witty, warm, intelligent, loved football, with a good, firm set of tits and a wicked bubble butt – what more could one man ask for? Jerry could almost see himself settling down on a permanent basis with the girl.
But first he had to indulge his anal cravings, gauge her reaction. Like lemmings over a cliff, he just had to.
She was standing in front of the mirror on his dresser, her sun-burnished, rounded backside resplendently split up the middle by a sexy black thong. She was wearing nothing else but the erotic underwear and a smile, getting ready for her part-time job as a server at Laissez Faire, a sleazy night club on the East side. Her skimpy French maid outfit was lying at the foot of the brass bed Jerry was stretched out on. He was naked, his cock hardening along with his resolve as he studied Marion’s bold, bronze butt mounds.
‘I don’t like you working at that joint,’ he said, watching her cheeks flex as she applied lipstick.
Marion puckered her lips and blew a kiss at Jerry’s blond reflection in the mirror. ‘Worried I’ll meet some rich playboy?’ she teased.
Jerry gripped his erection and stroked, fingers swirling over the veined length of his pulsing hard-on, eating up the girl’s ripe, peachy bum with his hungry eyes. Her overstuffed seat cushions shone smooth and hot under the muted lights, gleaming orbs of taut, yet pliable flesh. ‘I don’t like you parading around in that outfit, wiggling your ass in front of all those drunks.’
‘Can’t be helped, darling. It pays the tuition. Just one more year and I’ll have my diploma, be making scads of money. Until then…’ She shrugged her shoulders, her cheeks jiggling enticingly.
Jerry slid off the bed and walked over to her, cock bobbing, pointing the way to her butt. He put his big hands on her shoulders, his big cock pressing against the heart-stopping swell of her buttocks. She patted his hand, then plucked a bottle of mascara out of her make-up bag and started applying it to her lashes.
Jerry’s hands fell off her shoulders, and he took a step back. He stared down at her brazen booty, anger and lust combusting within him. He drew back a hand, hesitated, then whacked her ass, hard.
‘Hey!’ she yelped, grabbing the edge of the dresser, mascara tumbling onto the carpet.
He smacked her sassy cheeks again, and again, his teeth clenched and his eyes burning. Marion groaned, a mixture of pain and pleasure, her body trembling. Jerry noted her reaction and exulted, smacking her ass a rippling, reddening cheek at a time.
‘God!’ she gasped, rocking with the blows.
He grinned evilly, ecstatic to find that his in-control, sex-conventional girlfriend was enjoying his brutal expression of affection, was getting off on it as much as he was. ‘I’m not hurting you, am I, my dear?’ he hissed in her ear, spanking her bottom.
She shook her head, quick and tight. ‘No-no, but… I’ve-I’ve got to get ready for work…’
‘Work can wait!’ he rasped.
He slapped her right cheek, her left, setting the brown, blushing flesh in motion again. She bowed her head down and pushed her butt back, shimmering brown hair falling over her face, fingernails clawing into the wood of the dresser.
Jerry’s cock was a fire-forged rod of steel straining to part Marion’s plush butt cheeks, jumping each and every time he smacked her bottom. He set his hand in a rigid, horizontal paddling position, bent his knees and spanked both of Marion’s jiggling pillows at once.