Wayward cowboys with mechanical toys, an enterprising post-Civil War pleasure seeker, lovers conflicted in flight, and a lonely inventor whose salvation washes up on the shore of Penzance...these stories of passion in the time of steam are guaranteed to set fire to your sense. 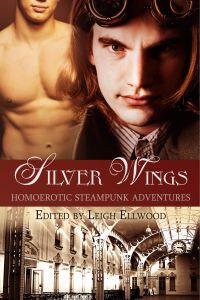 “This is bloody ridiculous,” Sean Carlyle muttered into his glass, glaring darkly across the crowded ballroom.

“Gently,” Professor Emerson, his mentor from the aeronautics department at the University of Oxford, advised as he joined the younger man at the edge of the crowd. “We wouldn’t want any displays of discontent with all our dear friends in the room, would we?”

“Friends!” Sean scoffed, managing to keep his voice soft despite the urge to yell. “France is a two-faced monster biding its time, and the rest are little more than satellites orbiting the sun of our empire.”

“So choleric tonight,” Professor Emerson said with a slight headshake. “Dare I ponder whether your opinion of the American has changed at all over the past few days?”

“That,” Sean said with a grimace as his gaze recaptured the figure that drew so much attention that evening, “is not an American. That is a caricature of an American.” Good God, could no one else see that the insolent newcomer was playing with them? His ridiculous long leather coat, the tall, broad-brimmed hat, those strange boots and the well-cut, tailored-to-look-rugged clothes beneath it all…the entire ensemble screamed “cowboy,” when any rational human being would have made an effort to fit into his surroundings, not stand out. Yet, there the man stood, drawing attention like honey drew flies and keeping it once people were close, with his smoothly good looks, his soft, strange American drawl, and a way of moving that captured you and refused to let go.

He was doing it again. Looking at Sean with that tiny smirk on his face, and Sean had been caught staring. Again. He jerked his gaze away, angry at himself for becoming enthralled by the abrasive foreigner. “Explain once more why I can’t have James as my pilot?”

“Because,” Professor Emerson said with exaggerated calm, “he cannot be spared from his duties at the Academy of Military Science, to which your Department of Technological Innovation is directly answerable. He’s the head flight instructor for our airship pilots, and with the way things are going now it looks like he and his students will be having more than enough to do before the year is out. So we had to look elsewhere, but of course hiring a Frenchman, who are the next most qualified group of individuals, was out of the question. So, the Board of Regents turned to America. ” He shrugged minutely. “Whether you care to acknowledge it or not, Sean, Mr. Winters has an excellent reputation as a pilot, and nothing we’ve seen so far has disabused me of his competency.”

“I could always take her up myself.”

“That,” the professor’s voice turned hard, “is possibly the most ridiculous thing I’ve ever heard you say, and I endured some very odd responses during your undergraduate years, Sean. You must have a pilot, someone to free you up to deal with any technical difficulties that may arise during the trial. It is the minimum safety requirement for the ridiculously dangerous endeavors that you manufacture for yourself, and may I say I would be much more comfortable if you went up with a three or four man crew.”

“So you’ve told me. Repeatedly. And I listened, my boy, and now I’m asking you to do the same.” He laid one hand on his former student’s shoulder. “You’re an excellent aeronautical engineer, and one of the finest inventors I’ve ever known. Your ideas are brilliant, but your motivation verges on obsession, Sean. You need balance in your work, or someday you’ll push an idea too far and wind up killing yourself, and where would that leave the rest of us? James has never reigned you in as much as I would like, and he’s no better at making a good impression in elevated social circles than you are.”

Sean opened his mouth to object, but Professor Emerson didn’t let him. “No, Sean. You need to give Nicholas Winters a try. Get a feel for his piloting skills, see whether you can work together, and keep in mind that having him around to charm our myriad of investors means that you don’t have to.”

“He seems to be able to do that, at least,” Sean grudgingly agreed, his gaze pulled back to the tall American against his conscious will.

“Give some thought to the source of this odd antipathy, my boy, and try to exorcise it,” his mentor advised. “Right now Mr. Winters is all we have, and the competition against France is in less than three months. It’s very important for the nation’s morale that we win.”

“I know.” Professor Emerson left him alone after that, but he was more distracted by his internal thoughts at this point than the charming, aggravating American on the ballroom floor. After a few more minutes and a few preoccupied interactions, Sean excused himself from the soiree and made his way back to his laboratory. That the American’s presence had given him the liberty to do so this early in the evening was the first thing he felt remotely grateful to the man for.

He loosened his tie and cravat as he walked, calculating the next step in the construction process of his new airship even as he cursed the circumstances that took James’ participation off the table. Yes, he was needed at the Academy. Yes, he hadn’t been able to tell Sean “boo,” much less reign in his sometimes disastrous creativity, but he was an excellent pilot, and that skill more than made up for the occasional error in judgment. At least, nothing fatal had happened so far.

Sean pushed that tremor of doubt to the back of his mind. He didn’t need his own subconscious giving him distractions, not when he had so many other things to worry about. Concrete things, like whether or not his new pilot was worth a damn at anything other than posturing, and whether he had correctly calculated the tensile strength of the armatures for the balloon. He’d gone over the math time and again, and it was rather pointless now to worry about it since there wasn’t time to rebuild them if he’d gotten it wrong, but still…

The laboratory was empty except for himself and the ship. Sean walked to it, freshly captivated by her beauty even though he saw her every day. Polished brass fittings gleamed in the faint lamplight, dark wood and pulleys and wound metal cord working together like an orchestra to create the opus that lay before him. She was coming together, and she would be perfect. She had to be perfect.

Sean closed his eyes and ran a hand over the railing, delighting in the flawlessness of it even as he wondered if he should have made it slimmer. Light, but durable. Tough enough to withstand the elements but simple enough that a two-man crew could operate her. So many equations to balance in his mind, and that didn’t even begin to take into consideration the off-putting factor of a new pilot. A new American pilot, someone who wouldn’t feel the same burning drive to win that an Englishman would. Someone who might not be willing to make the sacrifices it would take to win. Someone who might be afraid of the risks…although from the little he knew of the man, the concept of risk wasn’t frightening to him.

What did he know of Nicholas Winters, anyway? Sean retrieved a spanner from one of his graduate student’s toolkits and began checking the tightness of the bolts. He liked to work as he thought through things, as it seemed to make them clearer somehow. For starters, the man was American…well-established, that fact. He was something of an arrogant bugger as well—although, to be fair, that was par for the course with pilots. The work was difficult, demanding, and exciting. A little arrogance was to be expected, but the easy self-assurance of this man made Sean grit his teeth. Winters had fought for the West during the United States’ few years of internal strife not long ago, and apparently had distinguished himself. He had flown an airship without pause across the whole of the country which, given the size of that country, was saying something. He had excellent recommendations from Oxford’s contacts in New York, which was also saying something if they could be persuaded to praise a Westerner. He was astonishingly attractive when he smiled, and he smiled quite often…

A sudden sound jerked Sean out of his increasingly uncomfortable reverie. He turned his eyes towards the door, but there was no one there. The place was empty but for him and his ship. He was hearing things. He sighed and turned back to where he had been inspecting the hull. Strange, he hadn’t even remembered kneeling down. He trailed his fingers over the dark, polished surface of the wood and smiled. Here was where her name would be carved, eventually. It was bad luck to name a ship before her launch, and while Sean wasn’t really superstitious he also didn’t feel like tempting fate. When she was ready, he would christen her with a name. Then they would fly and they would win, no matter what the French could conjure or how distracting her new pilot turned out to be. Even though, right now it seemed like he was going to be very distracting indeed.