Do you believe in witches?

Adam Wyatt will tell you that he certainly doesn't believe. He's the solemn, sensible blacksmith of Slowly Fell and he keeps his distance from females entirely for his own tranquility of mind, not out of any fear of mischievous magic. In his opinion, the great number of souls lost forever to the village pond can be blamed on carelessness and unlucky accident; nothing to do with a witch's curse.

The Dowager Lady Bramley, widow of the local squire, also denies a belief in witchcraft. Or ghosts. Although she's lately enjoyed long discussions with her dear departed husband, who is intent on luring her to Slowly Fell, a place that haunts her dreams-a village with a macabre history, and a connection to her family that she would rather not remember.

Admiral Wetherby did not believe in witches either, until madness caused him to burn down his house and all his possessions, sending himself up in smoke with it. And now his daughter, practical, level-headed survivor, Sarah Wetherby, arriving in Slowly Fell to look after the vicar's sick wife, doesn't know what to think about witches. She is not a young woman prone to fanciful ideas, but she loves a good mystery, and there is certainly something going on in Slowly Fell. Sarah has begun to suspect that she's lived here before. Certain sights around the village are familiar- the house where a reclusive old woman resides in grand, but lonely splendor; the pond where a family of accused witches once met their deaths in the ducking-stool, and even the gruff manners of that handsome bachelor blacksmith seem to her familiar as old friends. Or something more.

But in Slowly Fell, nothing and nobody is quite what they seem. 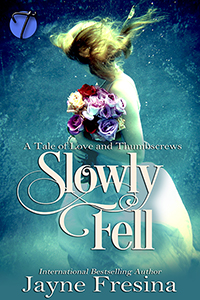 "Do you believe in witches?"

Moved not by her small fingers, which had briefly rested against it, but kissed by a wending draft from somewhere within the house, the door standing ajar before her creaked gently, exhaling a quizzical moan.

She heard her aunt's voice inside the room. "Witches, Silas? No, I most certainly do not. I know that sailors are sometimes betaken by flights of fancy and superstition, especially when they've been at sea for months, the grog has run out, and sea creatures begin to look like beautiful women singing a siren song, but from you I expect better."

Her father said nothing in reply, and her aunt's gown rustled impatiently.

"I shall leave you to your brandy, brother, for I need my rest. Tomorrow I depart early for York and then London. But remember our offer. We can take the children until you are in better spirits. When you can see the future again, my dear brother, and have a clear head. When-"

"When the hurlyburly's done," he muttered. "When the battle's lost and won."

"Oh, not Shakespeare, I beg of you! I am far too tired for that."

"Shakespeare? Is that what it is?"

"Of course. The witches of Macbeth."

And her father expelled a sigh that seemed to say, Ah yes, that explains it. But any relief in the sound was squeezed narrow, too slight under the tension in the air. A moment later he spoke again. "I thank you, Clothilde, for the offer, but this is my doing and I must see it through. I should have left her there. I brought the doom upon myself. No good deed goes unpunished."

His sister made a small, frustrated sound. "Tonight I take pity on you, because I know you are grieving, and I save my breath, because there is no reasoning with a man in his cups. But the sky will brighten again, Silas. Daylight always greets us in the morning. Take comfort in knowing that. We must press on with our lives."

Although she spoke of pity, she was mostly aggravated by the inconvenience to herself. It could be heard in her tone. She had no time for weeping and lamenting, certainly thought that her brother- a naval admiral- ought to be beyond all that and able to pick himself off his knees with greater alacrity. But she was always the stronger of the two siblings and it was only the accident of her gender that kept Clothilde from commanding a ship and earning a chest full of battle medals herself.

The child outside the room listened as her aunt's footsteps clicked smartly toward her across the floor, the tidal wave of her frustration gaining strength as it rippled along the boards only slightly ahead of her toes. The door moved again in that draft, just before it swung all the way open, and by then the little girl- who was supposed to be tucked up in her bed- had slipped aside, swallowed up by the shadows as her aunt left the library.

Aunt Clothilde sailed away down the corridor, the beacon of a tall candelabra in one hand to light her way, the waves of her black mourning gown lapping at the woodwork. As she muttered about the stubborn pride of men and the evils of alcohol, those flames she carried bowed and shivered in the ebb and flow of her breath, their edges battle-ripped, like a flotilla of golden sails in a storm on a midnight sea.

It was the last conversation the admiral and his sister ever had. Perhaps Clothilde never recalled his final words to her; she never mentioned them again. But she was not a woman who paid much attention to what anybody actually said, so busy fighting her own cause that she was deaf to any other. Besides, after the tragedy that followed she had much more to think about. The admiral's eavesdropping daughter, however, remembered everything.

Do you believe in witches?

Unlike her aunt she was not so sure about the answer.

There had to be some reason why folk kept trying to kill her.

"You must understand, Sarah," her aunt explained after the fire, "It was not because he never loved you; rather, it was the reverse. The admiral saw too much war and death, suffered too much grief, and his heart was irretrievably broken, his mind bent, warped with the effort of carrying that weighty burden." And so, according to his sister, in some attempt to save himself and his children from further pain and damage inflicted by the world at large, Silas Wetherby had tried taking them to a "better" place. To what he believed was sanctuary.

That was Clothilde's version of events, meant to explain the searing flames, the choking smoke and the locked door, behind which he had trapped his children as he went on a rampage through his house with a burning torch.

Love, apparently, was to blame.

A panacea to soothe a multitude of wounds, if one could believe in it.

But young Sarah Wetherby would never settle for the first answer she was given. At only seven years of age she comprehended more than she should, having observed every detail and stored every word- especially those dismissed by other folk as inconsequential.

So her aunt could say whatever she wanted to comfort herself; Sarah knew she'd better sleep with one eye open from then on, because clearly other folk were not safe to be around.

For some time before the night of the fire, almost as soon as his last wife died on the birthing bed, she had heard the hollow sadness in her father's voice grow deeper, like the echo of a scream clawing at the walls of a bottomless well. She had soon become aware that his shirts and collars lacked a good laundering, that his hair went uncombed again, and that in his stockinged feet, with his waistcoat unbuttoned and his breath smelling of brandy, he paced the house arguing with dead wives and the ghosts of men lost in battle long before. He sunk farther down into that well and soon no rope would be long enough to reach him.

The air thickened like the sky before a thunderstorm. There could be no easy breathing again until the wrathful clouds were gone, their energy thoroughly spent. And the coming of it was inevitable, a force of nature. The best she could do was brace herself.

In those last days before the final madness, she seldom slept at night. This girl was not about to lie down passively and let the end come. She had too much life to live; too many wonders to see. So she watched and waited.

Once- she did not know where or when- she had admired the image of a phoenix rising from the fire, reborn and magnificent. That vision, engraved upon her young mind, gave her the strength, not only to break the window latch with an iron poker and escape through it, but also to carry- in arms blistered by the encroaching flames-her baby stepbrother to safety.

Oddly enough, even so young, she knew that this was not the first time somebody or something had tried to take her life.

It seemed likely that this attempt would not be the last.

And, as it turned out, she was right.