Slowly Rising is a house that slumbers with one eye open—a lantern that flickers with watchful amber flame in a second floor window. But like a cat hunched before a mouse hole, it is never fully and deeply asleep. Just pretending.

Once in a while it stretches; its tail languidly unfurls to give a single, sultry sweep from side to side before it lies still again. With an ear to the wall you can hear the wattle and daub vibrating with a low, throbbing purr.

The woman who sings in the walls of the house is waiting.

Amalie McKenna, the new lady's maid at Slowly Rising, is ambitious, hard-working and devoted to her job. Nothing can distract her and she has no time for mischief. This house might have a macabre history and more than a few wayward spirits, but Amalie is unimpressed. The supernatural has been a part of her world since before she was born and there's not much left that can surprise her, or make her heart beat faster.

Gideon Jones has also come to Slowly Rising with a job to do. Unlike anything she's ever encountered before, he's a straightforward, plain-speaking, fearless cockney with rough edges and an irrepressible smile. He claims to be an ordinary valet, but Amalie doesn't believe that for a minute. Because nothing that lives within the walls of Slowly Rising is quite what it seems.

Despite their differences, there is one thing the house's residents have in common: they're brave souls who came on a long journey, ready for adventure. And if they are bold enough to ignore the warning scratched into the doorframe, the menacing sentry of crows, and rumors of a man once scared to death within, then they're welcome to stay a while. At their own risk.

Now the woman who sings in the walls of the house waits for you. Are you ready to step inside? 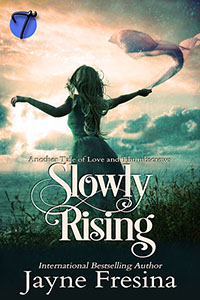 Once upon a time, a man called Amos Wilding unintentionally built himself a singing house. It is debatable, whether or not he ever heard it sing. But certainly, when other folk did, they wished they hadn't.

The sound was described as a fluttering, flickering, puttering whisper that traveled through the walls like a swarm of invisible butterflies— not the customary, fragile, dainty sort, but a dangerous, rare breed, poisonous and arbitrarily destructive— drifting from no fixed place and traveling in no discernible direction. This music was neither of, nor made for, the living; existing on another plane, it wound a course uncharted.

And if, by chance, you happened to hear it, you could never forget.

There were long periods of time when nobody reported hearing anything. When the house behaved itself, or so it seemed.

But on one particular, dark December morn in 1606, the house was at it again. Perhaps, under the circumstances, the walls could not contain themselves.

It began with a gathering of excitable air bubbles, colliding and vibrating softly. Thus it created moving waves to shape the sound of a song, and off it swept, finding its way under the white linen flaps of a chambermaid's cap, to invade the waxy ears that lurked beneath.

"Alas, my love you do me wrong

to cast me off discourteously,

for I have loved you oh so long,

Staggering along the corridor, sleep still crusting her eyelashes, this unfortunate woman thought the day much too young yet for anybody to be singing in it. Not only that, but the cadence was quietly scornful— even menacing— rather than lovesick and wistful as the lyrics suggested.

"Greensleeves was all my joy

Greensleeves was my delight

Greensleeves was my heart of gold

And who but my lady... Greensleeves."

The eerie sound of that bodiless voice lifted the hairs on her broad arms, but with her mind slow to wake and her thoughts, few as they were, set on the dreary routine of tasks ahead, the chambermaid had little time to stop and consider the source. Another irritant had soon found her ear, buzzing around her head.

A plump fly. And she with no free hand to swat the living daylights out of it.

A fly? In the miserably cold depths of winter and a shut-up house? Where the devil had that come from? Like the singing, its origins were a mystery, but not one upon which she dwelt. Sometimes it was best not to think too deeply about what happened within those walls.

"I have been ready at your hand

to grant whatever you would crave

I have both wagered life and land

your love and good will for to—"

Her heavy footsteps came to a halt outside the master's bedchamber and at that same moment the singing abruptly stopped too. Cut off mid-note.

In the dim light, with her gaze still sleepy and unfocused, the maid noticed now a small, dark blot creeping out from under the door. It barely registered in her thoughts beyond the annoyance of having something extra to clean. Had some "clumsy lubberwort" spilled treacle? She set down her lantern and immediately the fly landed on her fist, fizzing and spitting.

With a muttered curse, she shook it off and opened the door.

Taking one stride forward onto slippery boards, she almost lost her footing— would have done so, had the liquid into which she stepped not also been viscous. As she caught her breath, a thick, pungent odor filled her startled lungs and caused an immediate retching. Hastily covering both nose and mouth with a bundled fistful of apron, she had only a moment to notice the slow plip plop of something leisurely dripping.

Grasping for the lantern, she raised it high and then her eyes, aided by that flickering, swaying light, discovered the scene within.

Those with the misfortune to hear the unearthly sound that came out of her mouth soon after would later describe it as a shriek loud and haunting enough to peel away skin and wither flesh upon the bone.

The flame inside her lantern snapped out as it fell from her fingers to the floorboards and then, with a new burst of vitality and urgency, her feet carried her faster than they had ever moved before. Thundering down the stairs, she shoved aside her fellow servants and flew out of that house, away through the woods, her boots and skirt hem leaving a scarlet trail in the midwinter snow, her screams scattering crows from the frosted boughs.

She never looked back, never went near the place again.

Eventually, one by one, the crows returned and so did the braver household servants, creeping to see what had startled the chambermaid.

Thus the master of the house— not until that moment known to be lost— was found, propped bolt upright in his bed, with a countenance frozen in wild-eyed, open-mouthed terror, his bony fingers still curled around the quilt, his face sunken-in like an old mine shaft and grey as flint. Blood and the juices of decay leaked from his corpse, saturating the mattress and forming a slowly expanding pool beneath it. The tilting angle of the bedchamber floor had caused a gently wending stream to follow a rut in the boards and make its way to the door. As if his melting, rotting remains sought a way out of that room. Out of the house he'd built.

That sinful curmudgeon, Amos Wilding, was dead. Dead as a door nail.

It is customary to say a sad word about the deceased, but in this case there is not much to say. In life he should have been kinder to his neighbors, gentler with his daughters and less miserly with his fortune. He should have been a lot of things, but like most folk he hadn't the time to spare, being too busy doing what he could, rather than what he should.

Now nobody had time for him. Nobody mourned his passing and the house sang in celebration.

Amos was not even supposed to be at home. The place had been shut up for three months, while he was thought to be away in London, at the house of a wealthy merchant acquaintance— seeking richer husbands for his daughters than could be got here in this out-of-the-way place. The servants had unlocked the doors and folded back the shutters that morning, preparing the house for the family's imminent return. But there they found him, all alone. As if he'd never even left.

Scared to death, so it seemed.

By what? By whom?

By his wife, of course, they said. Who else?

Rumor had it she'd been dead a while herself, but this was surely proof that Belle Arden was far from done with her vengeance. Far from gone.