Dick Dice P.I. (Problem Interceptor) is assigned to intercept a problem in 1930. The problem for the time traveler is Simon Temporello, a bored spoiled rich psychopath who chooses to be a gangster in the past. In intercepting this problem, however, Dick runs into some unique non-human obstacles he must work around in order to stop Simon. 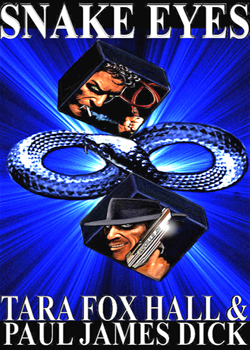 Most of us were brutal and not much better than those we hunted. I was one of the best. I had taken out truckloads of Temporello’s goons in other times and now I had tracked him down in 1930s New Orleans. He was out of men and he was mine. I could smell his fear.

The obliging woman was a Creole hooker called Tina. I met her outside a jazz bar off Bourbon Street. She reminded me of my Lucille so much. Her breasts, ass, and thighs were the same, but a few shades darker, one part Mocha satin, one part muscled bronze, but all hot chocolate. Her eyes were twin bottomless pools of dark promise fulfilled. Under the dice’s influence and my sinner’s grin, she said she would do me for the price of a drink and a place to sleep.

I couldn’t chance more than a half hour in that dark alley without our cries drawing the attention of some beat cop. She moaned out in surrogate orgasm from her position on my ribcage as I climaxed. As she stroked my face and neck, the hooker’s hand changed into a blade. Stupid…I left myself wide open.

Simon Temporello was furious. His handsome but gaunt face, emphasized by its high cheekbones and sunken eyes, showed all the telltale signs of a long love affair with his junk habit. He glared disdainfully with dark eyes at his men. Not only had his newly acquired gang messed up the first hit on Dick Dice, but they had attracted the attention of the man they called Lash, mistaking him for Dice.