He was raised to be moral and ethical—he was created to be neither.

Quinn Riley wasn’t born. He was created. Constructed of artificial DNA, he is designed as the perfect soldier, explorer and assassin. His purpose is clear…until the scientists who manufacture him abduct him in his infancy.

With a new identity, Quinn is raised human, oblivious of his true origins. Only when Socrates, the parent company who funded his creation, finds him twenty-five years later does he learn the truth of himself.

With Socrates fighting to get him back, can Quinn's learned humanity override man-made genetic programming? 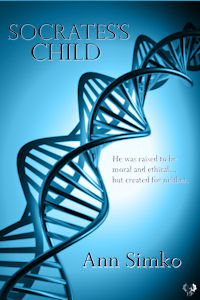 They are Quinn’s creators. The words made it through Quinn’s subconscious and dragged him out of sleep. He knew he would pay for disregarding his body’s demands, but he couldn’t ignore the fact that Moke and Josh were talking about him. He had too many questions and Moke appeared to have the answers. Forcing sleep back, Quinn opened his eyes. The headache he knew waited for him, pounded at the base of his skull--the site of Moke’s transferred injuries. If he didn’t sleep, it would get worse, guaranteed. For the moment, the need for answers overpowered the need to sleep and heal.

He raised a hand, shielding his eyes from the dim lighting. The movement brought the conversation to a halt and Josh to his side. “Quinn, go back to sleep, dude. It’s too soon for you to be up. You know that.”

Quinn ignored Josh’s concern and pushed himself up to a sitting position. He squeezed his eyes closed, trying to shut the pain down to a manageable level. He found it impossible and decided to press forward before the pain took him down without his permission. He opened his eyes and focused on Moke.

“What do you mean my creators?”

“Is he okay?” Moke asked Josh.

“Does he look okay? Look, when he does that, when he heals, it takes a lot out of him. Quinn is like a battery, he needs time to recharge. If he doesn’t, he just shuts down. He needs sleep.” Josh voiced the last part directly to Quinn.

“And Quinn can speak for himself,” Quinn said and looked back at Moke. “Answer the question, what do you mean by my creators?”

Quinn shook his head and then immediately regretted doing so as his headache cranked up. He put a hand to his temple and spoke quietly to Moke. “You don’t need his permission. This concerns me and my family. Someone has my mother?”

Moke nodded. “And James--Kyle, your father. Okay, I would rather do this differently, but time is short.” He handed Quinn his cellphone with the pictures of his mother on it. “They know who you are, it’s only a matter of time before they find you. It’s my job to make sure they don’t.”

Quinn looked away from the pictures and placed the phone in his pocket. His face betrayed nothing of what he was feeling. “Who, why, what makes you my watch dog? Why would someone want to hurt my parents, or want me?”

Moke reclaimed the chair next to the bed. “As I told your very protective friend here, I worked with your parents for a company called Socrates. It’s a research and development facility.”

“Research? What type of research?” Quinn narrowed his eyes at Moke. He had a bad feeling about where this was headed. It was as if every doubt, every question he asked about himself was on the verge of being explained. The information there for the taking. The problem, Quinn suddenly wasn’t sure he wanted the answers.