Somersaults: Rovings, Tears & Absurdities - A Memoir from the Fringe of Journalism

Born in Vancouver, the author of this unusual memoir initially attended school in Australia. Getting to Australia was one thing - getting back to North America in the middle of World War II, aged now seven, was a different kettle of fish. He and the nuclear family of which he was the smallest part sailed from Sydney aboard the S.S. President Grant, which soon necessitated a hair-raising escape across the South Pacific to avoid prowling Japanese submarines intent on sinking a ship that bore the name of such an illustrious American president. Provisions exhausted, the ship's complement was obliged to drink condensed sea water and eat quantities of flying fish for sustenance – the very stuff of scurvy.
In geography classes he found himself well in advance of his peers; in all other studies he suffered lamentably – until his art teacher hit on the idea of abandoning the incomprehensible sciences, and Latin. Permission granted, this enabled a welcome concentration on the arts: ceramics, writing, art history.
He returned to Canada the worse for wear following two years of active service in the British Army's colonial wars in Africa and the Far East. There was no help for victims of PTSD in those days, so he muddled his way into parochial Canadian journalism. It paid the bills but almost certainly increased the intensity of his angst – until, on assignment in Rev. Martin Luther King, Jr.'s Birmingham, Alabama, of the 1960's, he came upon an entire population even wackier than what he had found in the British colonies. The only way to make sense of it all was to write it down. Alternative realities presented themselves as stories, and journalism became the method of telling them.

About the Author:
J.J. (Jeremy) Hespeler-Boultbee started travelling when he was two, and has been on the move ever since. Finishing school in England, he served for two years with the British Army in Kenya and Malaya before returning to Canada to work as a journalist. His later working life was spent as an artist and academic in Portugal. He has travelled widely in Europe and Africa, and currently lives with his wife in Victoria, on Vancouver Island.
J.J. Hespeler-Boultbee is the author of three books: A Story in Stones: Portugal's Influence on Culture and Architecture in the Highlands of Ethiopia 1493-1634, Mrs. Queen's Chump: Idi Amin, the Mau Mau, Communists, and Other Silly Follies of the British Empire – A Military Memoir, and Somersaults: Rovings, Tears & Absurdities – A Memoir from the Fringe of Journalism. 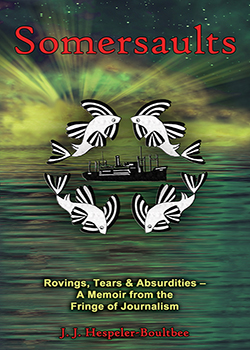 Somersaults: Rovings, Tears & Absurdities - A Memoir from the Fringe of Journalism