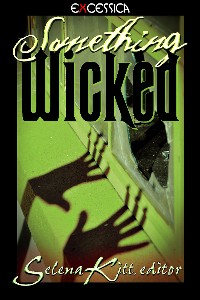 From Crabs by ME Hydra

What do you get the man who has everything? Newman G. Smythe knew the answer to that question.

He stood in a fancy hotel room many floors above street level. The room was familiar, comfortable. Hotel rooms didn’t vary that much. The walls were covered in plain burgundy wallpaper and decorated with bland prints of modern art. There were two queen-sized beds. A large television set stood in a cabinet against the far wall. The door to a large en-suite bathroom was located off a short entrance hallway. Wardrobes took up the opposite wall of the hallway.

Smythe had spent many nights in rooms like this.

The view wasn’t quite so familiar. Smythe looked out of the window onto a chaotic, sprawling city. Numerous neon signs lit up the maze of streets. Those streets, the veins and arteries of the city, were clogged up with traffic that honked like frustrated beasts. It was at once both recognizably human and completely alien. It was such a contrast to the pebbledash council estates of his youth. It reminded him how far he’d come.

He wasn’t here—hadn’t flown all the way out to the other side of the world—for the sightseeing.

There was a knock at the door, soft enough to almost be inaudible.

Smythe was familiar with such knocks. Like the hotel rooms they’d been a regular part of his life over the last decade. He felt the same anticipation, the same response—heart beating faster, palms growing sweaty—even though this time his excitement had a different cause.

On Cherry Hill
Selena Kitt
In Shelf
$2.99
Tweets by
sirenbookstrand