This anthology from Sabb contains three short stories set in Galicia, in the heart of the northern part of the Iberian Peninsula, an area known as Green Spain. The stories are about Galician men who meet and become the lovers of foreigners, foreigners who fall in love not only with Galician men but also with the land they come from. 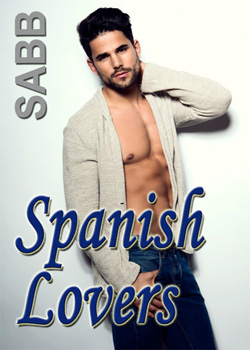 Extracted from: The Power of Words:

The casual Spanish physicality confused him, and he didn’t want to cause an embarrassing situation as he had recently with another acquaintance, taking casual hugs as meaning more and at their last farewell, probably the last time he’d see him, moving his mouth to the other man’s as he slipped his arms about him. Feeling him freeze up and pull back, confused. Him apologizing. He shook off the memory.

Antonio was a young man he liked talking to. They had met several times to practice Spanish and English together, Antonio improving his English while he worked to improve his Spanish. He was lonely for sex but also for a physical relationship and knew he was probably seeing more in things, and his difficulty in understanding Spanish was a definite problem. He was still finding his feet in this new place.

He sighed and got up from the table. I think skipping lunch before the beach is a sign that I should stop daydreaming about Antonio, he said to himself and paid for the coffees and tapas they had enjoyed. The walk to his car was past historic buildings that always left a sense of wonder in him—wonder that they had survived so well and wonder that such grand and well-designed structures were there, in such a . . . backwater, was the best way to put it. Monforte de Lemos may have been a major medieval trading centre, but the medieval days were far behind it. And here in Monforte most of the great buildings were built later, the creations of the seventeenth and eighteenth centuries, and, he assumed, had been largely financed by the gold of the Americas. This, he always thought, was the legacy of that wealth. The magnificent churches and convents.

In the late nineteenth century Monforte had been fortunate to be one of the first Galician cities to get the railway and had flourished again, briefly. Now it was a regional centre that had been contracting for some years while remaining a place where architecture and history were valued.