Colette, a beautiful redhead, feels jaded. The fire of her sexuality is dampened and nothing feels kinky enough to relight her fuse. Until she meets Jouet, creator of a whip made with the hair of his last spanking conquest. But Jouet doesn’t agree to just spank anybody. Convinced Jouet can re-ignite her ebbing passions, Colette plays a cat and mouse game with the bearded dom. But who will emerge as master in their kinky power play?

Just Watch Me by Justine Elyot

Shy Sharleen didn’t know she had an exhibitionist streak until James coaxed it out of her. It wasn’t long before making love in front of James’ flat mate turned into a full scale performance on Webcam for thousands of selected viewers. Shy Sharleen morphs into sex-goddess, Starleen, with her very own online live sex show.

Jillaroo for a week by Eva Hore

Melissa and Sheila can’t believe their luck when they see a holiday job, Jillaroo for a week advertised in the Australian Outback. There doesn’t seem to be much to do on the ranch and they’re getting paid $1000 a week to boot. But all is not as it seems, they realise, when they come across some very kinky goings on. Good friends and occasional lovers, they aren’t averse to a bit of kink themselves, but there are some things that even this kinky couple find taboo.

Maggie and Robert had to wait weeks to get a reservation. But this is no ordinary establishment. They are given far more than drinks by their host, not to mention dozens of other unseen hands. In the almost pitch darkness of the pleasure chamber only touch, taste and scent matter.

All About The Sex by Penelope Friday

Xavier and Carla have an arrangement that suits both of them. It’s sex only, nothing else is important. Yet in this role-playing game of domination and submission, which of them is really in charge? Is it love or hate? Perhaps there isn’t as much difference as they think. 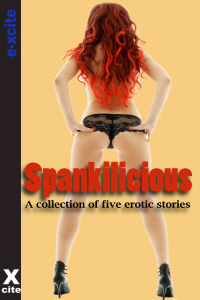 Colette’s kinky explorations with spank, had started with a single slap, and that slap had flicked the ignition switch within her sex which was enough to send her on a heady spiral of female ejaculatory delight. She derived intense pleasure from having her tight little butt cheeks spanked and her hair pulled until her eyes watered. But, before long a simple spank failed to satisfy her, and Colette sought out masters known for their psychological control, and their skill with paddles and whips, as she demanded ever more violent spankilicious sessions.
Colette thoughtfully fingered her bottom lip. Oh yes, she needed to be slapped until all her metaphorical sexual valves were turned on, and she was teetering on the verge of orgasm. Lately, however, she required more of a perverse, spankilicious thrill than even that. She yearned for an injection of divine kink.
‘It’s like a surfeit of chocolate or too many drugs,’ she explained to Maxine, who acted as her informer within the world of fetish kink. ‘Too much of it simply deadens you and then you fail to reach the requisite high. The truth is, darling, simple spanking doesn’t do it for me any more. I need something else.’ Colette was pacing her lounge like a caged lioness. ‘I need some edge from a true kink maestro. I want a man who doesn’t just play at domination like he plays a round of golf. I want a man who feeds his desire like an obsession. Now, Maxine, there has to be a spankilicious master out there, who can give me a fix. Find him. Dig deeper.’
Soon Maxine came to Colette with an interesting piece of information.
‘I’ve found him,’ she said triumphantly. ‘They call him Jouet and he uses a hair whip.’
Colette experienced a frisson of sexual interest and the return of the ripening wetness between her legs.
‘Women go crazy for him, and the tales about his whipping skills are legendary.’ Maxine elaborated. ‘They want to fondle the hair whip and hold it on their fannies. He’s a true pervert, a fetishist of the first order.
‘So how do I catch his eye?’
‘Well that’s the tricky part. Forget all those pervy guys you used to hang around with. They’re just amateurs. Jouet takes sadomasochistic multi-orgasmic subbies only. I’m told his goal is to make women scream with euphoria and he really gets off on it.’
‘Ooh la la!’ Colette exclaimed, smiling to herself as her nipples firmed into hard points, and she curled her long, extravagant hair around her fingers. ‘He sounds just the one for me.’