Jake left Justice, Kansas shortly after the wreck. His life had been forever changed and he didn’t know how he could stay in the one place that was a constant reminder of both women. Now on a quest to prove himself he taps into the one thing better left alone.

Charlie knew that eventually she’d have to run again. Resolution, California wouldn’t be safe forever, someone would learn about her past. She just never imagined it would be the one person she’s spent a decade trying to forget.

Charlie and her brother Justin have made a new life in their beach side house on the banks of California. Justin stripping and Charlie hooking - neither wanted these jobs but they both paid the bills. Life was calm until trouble happened inside one seemingly friendly hotel.

Jake and Charlie, face to face with each other and their past.

Will they both overcome their shadows that haunt each of them?

Is there ever a way to forgive and forget when death is involved?

Special Assignment - The only thing special about this assignment are the two people involved. 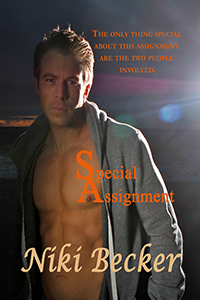 I loved my job, even if it wasn’t for everyone. You woke up, got ready, plastered that smile on your face, and then headed out to face the world. That mean, cruel world that loved to suck the youth right out of everyone. I wasn’t old by any means; twenty-eight was still manageable. My whole life was ahead of me, but I wasn’t a spring chicken either. The new girls came in, took clients, and would high- tail it when they found Mr. Right Now, but not us veterans. No, we were in this job for the long haul.
He was still asleep. This one always slept afterwards. Maybe he had to dream it out of his system, pretend he wasn’t as bad as the others. Let’s face it, most politicians and businessmen around here had one of our numbers on speed dial. We didn’t judge; we weren’t paid to. We did, however, talk, and if a john treated one of the young ones inappropriately, we took care of him. Our sisterhood was elite, hard to get into. But once you were here, you were a lifer, even if you did make it out of this hell hole.
I picked the money up off of the table and left the hotel, counting the roll of twenties one by one while walking down the streets. Some days it felt like I could do my job without the man’s help. Other days, like yesterday, I was glad to have a partner in this. Maybe partner was too strong of a word; it’s probably more like a tour guide. You know, he told me where to go, what to do, and when to do it, but yesterday, when I was attacked, he was like a partner. He’d never left my side. One would argue that’s what the girls all paid him for, others would say it was the least he could do with the situations he put us in. Me, I was just thankful that I didn’t have to deal with it alone.
“Hey, Charlie, he’s waiting for you.”
As usual, I faked the smile I flashed at Stan as I walked through the doors and into the back office. I pulled the roll of twenties out and tossed them on his desk. Sixty percent to the house, forty percent to my bank account.
“I got a special assignment for you.”
“No can do. Got a regular in two hours. Can’t pass him up.”
“You can, and you will. This one wants to drop a grand just for one night with you. He asked for you specifically.”
“You can’t have one of the other girls do it? You know how I feel about my regulars.”
I watched him raise his hand in the air, as if he was trying to silence me. “I’ve spoken. I’m sending Misty to your regular. You’ll collect ten percent, like a finder’s fee, if you must. This guy, though, wants you specifically. Here’s his location and the time. Play nice.”
“Nice? Since, when do you want your girls playing nice?”
“Since, we were just offered a grand for one measly fuck. Now go.”
He was holding out the piece of paper at me, waving it. With a regretful sigh, I took it and had just turned to leave when I heard him say, “A grand, Charlie. Wear your best panties.”
“Yeah, we’ll see.”
I walked out of the office and through the building back to the street. It was a good thing I liked walking, because my feet on the pavement were how I spent most days. The pier was always nice this time of year. The paper said this guy was at the Eden Plaza on the pier. I knew that place well. A couple friends worked there. My mind wandered to my regular that Misty now had. I felt the need to warn her about his kinkier nature, but decided everyone needed to be introduced to the weird and strange the same way I had been, by surprise.
The Eden Plaza looked magnificent against the sunset along the pier. The whole building of the hotel seemed engulfed in orange and red light. I walked up the side of the building and slipped into the lobby. Andy was standing there behind the counter. He caught sight of me and waved me over. He always was a good friend.
“Charlie! I assume it’s business not pleasure that brings you to my hotel, yeah?”
“You know I couldn’t afford this place if it was for pleasure.”
“Well you could, babe, if you ever decided to take me up on my offer.”
“You know I can’t be a kept woman, Andy. I need ta earn my way.”
“One day, Charlie, you will come to your senses. Until then, I will have to settle for our movie and pizza nights I guess.”