Pearl, a happy, vivacious youngster adopted from China, is endowed with a gift for seeing other worldly spirits. Not happy with this power, she tries to understand the ghosts following her, instructing her, and even threatening her. Things go from bad to worse when she sees a spirit with a funny spider on its arm. Alarmed, her mother, Ruth, has her draw the spider, which is actually a Swastika.

How will Pearl and her mother fight the forces of good and evil? Will the frightening truths about their city, their home, their friends, and even their own family unite them, or create chasms that can never be repaired? 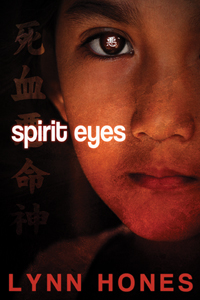 Midnight brought a typical cold night at the lake, and Ruth woke, felt the chill, and turned onto her side to curl against Paul for body warmth. A light went on, and just as quickly it went off. It happened again and Ruth turned her face toward the girl’s bed. The nightlight next to the bottom bunk, where Pearl lay, came back on and then off.

“Pearl, what are you doing?” She questioned her in a stage whisper.

The light went on again and she heard her daughter’s tiny voice answer. “I’m turning on the light to see if she’ll go away.”

“That girl who is sitting on the bed between you and Daddy.” Her matter-of-fact tone belied the fear that sight must have caused. Ruth’s stomach reacted as if she’d just taken a quick ride down a hill in the car.

“Sweetie, there’s no one here. There’s no room. Maybe you saw Mr. Puds.”

“No, Mom. I don’t know if you’ve noticed, but Puddles doesn’t look like a girl. And besides, he’s lying here with me. He saw her, too.”

“She was there, Mama. She sat right there between you guys. She had long, blonde hair and she had on a headband.”

“How old was she?” Getting used to this now, she figured she’d ask as many questions as she could to see just how real these people were.

“How was she dressed?”

“Her t-shirt had the American flag on it and she was reading a funny looking magazine that said The Archies. I turned the light on and off to see if she would go away, but she wouldn’t. She talked to my mind. She told me to quit staring at her.”

“Okay, but please, Pearl, stop it. You’re creeping me out.” It was late, she was tired, and now she was—guilt-ridden. She shivered from the cold, or was it fear? “I’m sorry,” she sheepishly told her daughter.

“Mommy, can I sleep with you?”

“Of course you can. Come on.” Pearl jumped out of her own bed and Ruth lifted the blankets next to her.

Pearl crawled under them, smashing her tiny body up against her mother’s. “Damn it,” she said.

That next morning, with cereal and milk on the kitchen table, they ate while listening to the radio.

“We need internet out here,” Lotus whined. “How am I supposed to go on my sites?”

“You don’t,” Paul said. “That’s why we don’t have it here. So you read more. To live like the pioneer kids of the nineteen-seventies did.”

“What?” Paul put a spoonful of cereal in his mouth and stared at his youngest daughter.

“The one reading the magazine called The Archies?”

Paul glanced at Ruth. “Can someone fill me in?”

“Pearl thinks she saw a girl in bed with us last night,” Ruth said quickly.

“Well, did you tell her to get off?” Paul asked with a laugh.

Paul grew pale. Dismay tightened his features, and he spoke quietly. “What did she look like, Pearl?”

She told him word for word what she’d told her mother the night before. He stood, as if in a serious state of shock, and ambled into one of the lesser-used bedrooms. Upon his return, he laid an old, yellowing Archie comic book on the table.

“Yeah, Daddy. That’s zactly the one—that boy with the red hair and freckles and those girls with the blonde and black hair.”