An inspirational Christmas collection about the joy of sharing the Christmas spirit with those around us.

The Christmas season reawakens the desires and encouragement to give of oneself and to help others in need.

This anthology includes fifteen inspirational and contemplative stories, written by Olivia Stowe over the past couple of decades to follow themes of the Christmas season, and included inside the Christmas cards she designs and paints herself to send to friends and relatives.

They provide an opportunity for those conflicted in various ways or swept up in the hustle and bustle of holiday routine to pause, contemplate, grasp, and be heartened and set in motion by the true spirit of the season. These stories share an element of unexpected gifts or struggling to “catch on” to what the season is all about and are great mood lifters for those who feel overwhelmed or marginalized by the commercialism and consumptiveness of Christmas. 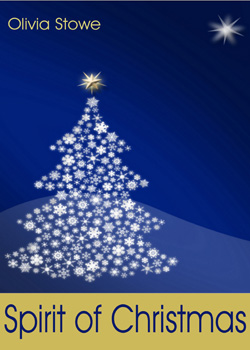 Emily couldn’t help herself. She had to look for it in Mulberry Junction’s window when she was still two blocks away. She couldn’t see it, though. For a brief moment she was afraid it was gone, and her heart fluttered dangerously. But then she realized that she couldn’t see into the window because a woman and child were standing there.

Ah, yes, it was still there, Emily realized as she drew closer. But her heart continued to flutter and she felt herself trembling with fear and anticipation. Her fear was dispelled as she drew close enough to see that the price had been knocked down to just within her spending capability. This only made her trembles of anticipation increase to take up the slack.

It was gorgeous. The figurines were larger than normal. They were made out of terra-cotta and were painted, obviously by loving hand, in several luminous shades of brilliant colors—not completely covered, the terra-cotta artfully showing through here and there, but in bright dabs of red, blue, green, purple, white, and silver—real silver that had been applied in molten form to the terra-cotta. Emily knew this process had required precision. The silver had to be liquefied enough to accommodate the design, but not so hot as to burst the terra-cotta base. Blue dominated for the figure of Mary, and purple for Joseph. The angel glowed with a bright white, and the Baby Jesus shown forth in a rich, deep red. Their faces and hands were designated in perfectly formed applications of silver. Other figures were there too, a whole complement of them—shepherds and kings and sheep and cows and camels and even the donkey that had brought the family to the large, unpainted terra-cotta stable that framed the Holy Family.

The Italian crèche was beautiful in its own right, exuding a contrasting feeling of delicacy and strength, earthiness and wonder. But to Emily’s eyes it was far more than that. It was as near identical as she could remember across the decades to the crèche that her mother had brought with her to her marriage, possibly her family’s most precious possession—beyond each other. Emily’s mother had brought it out on Christmas Eve every year when Emily was a young girl, and they had put it under the Christmas tree. And it would be whisked away on Epiphany twelve days later. Its appearance and disappearance bracketed the Christmas season for Emily. She had particularly been drawn to the Baby Jesus in his luminous splendor. And seeing the attraction for her daughter, once each Christmas Emily’s mother had permitted her to lift this single figurine out of the crèche and stroke the cool terra-cotta and murmur her secret delight to him as he blissfully slept away. . . .

The crèche had been swept away in the same flood that had taken the lives of Emily’s parents, and memories of it had stayed fresh in Emily’s mind, becoming something that she was searching for, some sense to be taken out of a hard life and from seemingly senseless tragedies such as life-taking floods. . . .

Then the miracle. The crèche had come to her small town and had made itself available to her as a goal she could still attain in her life. And here it was. It was still here, and in a few moments it would be hers. Her eyes sought the Baby Jesus. Yes, the same one, its paint perhaps even more luminous than her mother’s figurine. New, probably unhandled by human touch.

Emily involuntarily reached out, wanting to touch the small figure in the manger, even though she knew it was behind glass. Her hand instead touched the matted glove of a child, a hand also reaching out and touching the glass just beyond the grasp of the Baby Jesus. Emily looked down, first at the glove, which was threadbare and had a hole in it here and there, and then at the face of the child. She was no more than six or seven, and her eyes were greedily drinking in the crèche. But not the whole sweep of the crèche; she was focused on the figurine of the Baby Jesus.