Desperate and jobless a month before Christmas, Joe Crawford attempts to toss himself from the Brooklyn Bridge when he is intercepted by Archangel Raphael and told he must first fulfill a mission before he can ascend to the pearly gates. His family struggles with the knowledge of his suicide attempt and Joe continues to exist in half- misery when he receives a calling to assist one of the most challenging people in his life. Will he move on in peace and fulfill his destiny? 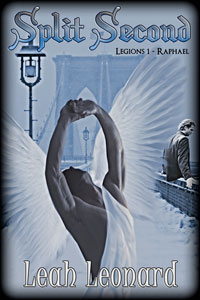 Joseph Crawford stood in the middle of the Brooklyn Bridge. He stared down at the water, across the snow-dusted tops of buildings at the childhood home he loved more than any other place on earth. The sounds of honking horns faded into the farthest reaches of his mind while dozens of events from his past flooded his memory.

He knew what he was doing.

He closed his eyes, spread his arms wide and leaned forward.

The wind whipped through his hair. He recalled riding in his father’s convertible to the Catskills when he was five years old.

His two daughters came to mind. Images of their younger years, giggling and laughing in the back yard by their swing set and the time they went sailing off the shores of the Hamptons in his boss’ boat.

Good times—each and every one.

As the breeze picked up, his arms and legs began to numb from the sting of ice hitting his cheeks. He saw Marge in her white dress, her blonde curly hair was longer then than it was now. God was she beautiful! They had a wonderful wedding. She wouldn’t like this, but he hoped she could forgive him. She would—eventually.

He opened his eyes to the blue water below, the world sped up and slowed to a halt all at once. No regrets.

Eyelids pressed tight, he felt a sudden jerk and all motion stopped. He never even felt the water or the cracking sensation as every bone in his body shattered, only a complete cessation of movement. In a split second, his life was over.