Squeaky Squirrel is a shy little squirrel with a squeaky voice. He fears most everything, especially change. He doubts he'll ever want to leave his family, but knows that the day will come when he'll be expected to leave his home to start his own family. When he meets Sally Squirrel he learns that what is most important is being liked for who you are on the inside. 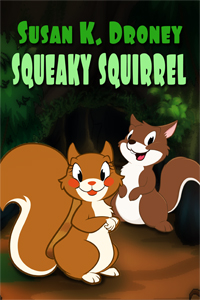 Deep in the forest, a little squirrel named Squeaky lived with his mother and father, older brother, Sam, and twin sisters, Jenny and Julie. Actually, Squeaky’s real name was Simon, but he’d been nicknamed Squeaky because every time he talked, his voice made squeaky sounds.

All through the long summer days, Squeaky and his brother and sisters frolicked and swung back and forth from tree to tree as they chased one another in a game of tag. Squeaky loved summertime best of all and wished it would last forever, but when he felt the first nip in the gentle winds that blew through the trees, he knew that it would soon be time to go back to school. He didn’t mind school. He’d just rather be playing in the forest all day.

On school nights, mother called them in early to their cozy home in the trunk of the tree. Then after their bedtime story, they burrowed down in their beds as the cold winds blew throughout the night.

Every morning Squeaky went off to school with his brother and sisters, and they raced each other down the long dusty path until they reached the school. Squeaky loved looking at the picture books, especially the ones that showed pictures of the forest.

He was a happy and contented squirrel until one day a new student was introduced to the class. Her name was Sally, but she didn’t look like the other girl squirrels he knew. And she didn’t look like his sisters. Sally was beautiful. Her coat was shiny, reddish brown, and she had the bushiest tail he’d ever seen. Squeaky wished he could find the courage to talk to her, but every time he opened his mouth, all that came out were squeaks.

Every night when the lights went out, Squeaky asked his brother all sorts of questions. Sam liked a pretty gray squirrel named Jessi and as the school year wore on, Sam spent less time with Squeaky and his sisters and more time with Jessi. Pretty soon Sam even stopped playing tag altogether and instead spent a lot of time in front of the mirror, grooming himself.