Carl Thornton, seventeen-year-old stargazer and total nerd, resides in Reno, Nevada, and lives for watching the night sky. His dream—discover a UFO. His mantra—“Seeing is believing.”

He meets Grace Paxton, and finds out through a series of circumstances, that she, her family and friends, aren’t exactly from around here.

As well, he learns the reason why Area 51 exists, the secrets it holds, and the danger in finding out those secrets. Carl also falls for Grace, but realizes that he has to find a way to get her and her people home—even if it costs him his life. 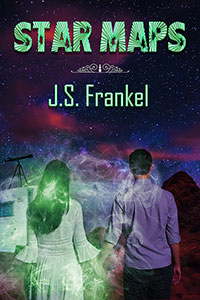 “Just tell me what you know.”

The voice—it belonged to a man—was harsh and demanding, and it cut through the haze of pain clouding my mind. Part of me wanted to get up, and the other part wanted to sleep. My inner-self voted for sleep. Too bad the voice had to come again and guess which part it kicked out?

Reality just had to intrude. Groaning, I quickly sat up. Mistake number one—never do anything fast after getting the crap kicked out of you and after almost getting killed in an avalanche. Both of those events had occurred earlier on in rapid succession, and they gave me a new perspective on what the word agony meant. As to how much time had passed since living through the above, I didn’t have a clue.

Dizziness forced me to lie down again. “Where am I?” I croaked out.

Whoever spoke sounded like a person who was used to being in command. Every word came out hard and clipped like he was giving an order. “You’ve been here for the past three hours,” he said. “My name is General Waterston.”

Okay, so I was right about the command thing. He continued to speak, his voice maintaining its controlling aspect. “You’ve been treated for superficial wounds. Our doctor gave you a shot to ease the pain. You won’t die, but you will have to answer some questions. This can be done the easy way or the hard way. You decide.”

Now I had a name to go on. Silence ruled again, and my brain settled down enough for me to sit up—slowly this time—and check out my surroundings. I was in a jail cell. Maybe eight by ten feet, everything smelled musty as if the air hadn’t circulated properly for a long time. Musty air—I’d been here before. “This is a mineshaft, isn’t it?” I asked.

“It is,” the person named General Waterston said.

Needle for the pain or no, my head still hurt as did my ribs. The head-hurting part came because someone had pistol-whipped me. The injuries to my ribs had come from the same person who held the pistol. He’d kicked my side a couple of times before the avalanche had started. As for my wounds being superficial, my immediate thought was, yeah, you get the living daylights beaten out of you and see how you feel.

Between the agony dance going on in my head and my side, not to mention feeling terribly depressed, my stomach started to rebel. The cot didn’t help things, either. Lumpy and smelling of odors that were truly revolting, it jabbed and poked my butt. Could this be considered another form of torture? Yes, it could, but try telling Mr. General that. Doubtful he’d listen, anyway.

In addition, everything was dirty. A single flickering light bulb overhead dimly illuminated the cell and sent a sickly yellow light that showed bloodstains on the floor along with bits of what looked like hair. An old, stained and cracked toilet sat in the far corner. It had no seat. An even older looking sink was next to it, and I wondered if the water actually worked. It really wasn’t worth asking, so I simply hung my head and tried not to think about how much I hurt.

“Just tell me what you know,” Waterston repeated. Right, say it again, as if it was going to make more of an impact. The ratcheting feeling of stabbing knives in my cranium connected to the pit of my stomach and caused it to flip-flop. From that point on I knew it was going to be a losing battle to keep the contents in. If this guy asked me to tell him what I knew one more time, the floor was going to get some more stains.

Naturally, he had to ask me again, and sure enough, I hurled. After retching up everything in my stomach, I sat forward on the cot, head between my legs, and picked it up long enough to blearily focus on my captor.

General Waterston, a tall, rail-thin man who looked to be in his mid-fifties, took off his cap, scratched a head of sparse white hair and gazed at me impassively. “Are you feeling better now?” he asked.

Not really, but why bother telling him? “I’ll make it.”

“Get cleaned up,” he ordered.

Groaning, I dragged my butt off the cot and staggered over to the sink. Turning the handle, it squeaked, and a stream of rusty brown water poured out. It soon cleared, and I washed out the foul taste from my mouth and then tossed more water on my face and all over my head. Job done, it was back to the cot where I wearily plopped down again. “What do you want?”

A sigh came my way, and the tone of his voice went from commanding to world-weary. Perhaps the responsibility of being in command of one of the most super-secret places on Earth was getting to him.

“Let me throw some facts your way,” he stated. “Your name is Carl Thornton. You used to live in Chicago. We know your parents are dead and that you’ve lived in Nevada about two years with your uncle. We know you’re a junior at Pahranget High School. We know who your friends at school are.”

In a sudden shift, the tone of command resurfaced. “That’s all on the surface,” he continued. “So now it’s not a case of us anymore. It’s me. What I want are the details on your other friends. I’m asking you, to be honest.”

He’d mentioned my other friends. What he wanted was to know all about them, who they were and more importantly, what they were. He could ask all he wanted, but no way was he getting any information.