Steffi and her best friend, Leah, love men in uniform and they have traveled to the coast for their favorite time of the year. The fine specimens who call the sea their lady are always looking for love, or perhaps a reasonable facsimile thereof, and the two young vixens can always be found waiting for them once the men’s ships have docked and their feet are once again on dry land. This year, Steffi and Leah stroll along the coast before staking their claim of two sexy sailors and a private cove to share with their seafaring sex gods. Determined to make the week last as long as possible, the long-time best friends have carefully planned their vacation to include only those venues frequented by their seasoned seamen. 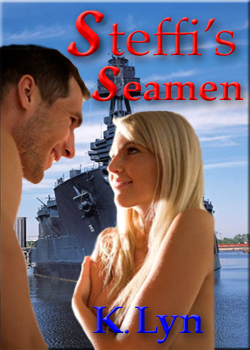 There was a slight breeze at the beach today, just as there had been on their first visit here a couple of years ago, and the air was mixed with the smell of sunscreen and cologne and just the right amount of lust, or so it seemed to the two young women. The two best friends had not gotten very far as they walked bare footed along the coast line when a couple of sailors approached them.

“My friend and I were wondering if you could give us directions,” one of the handsome sailors said to Steffi.

“Mmm, give me more,” the sailor whispered softly to her.

Steffi continued, as she kissed her gorgeous sailor with greater affection. They moaned into each other’s mouths and rubbed their bodies against each other. Oh, yes, this was what Steffi needed, a day at the beach. The sailor’s hands never stopped stroking her face, even as one of those hands moved down to her chest. The seductive sailor untucked her blouse before he unbuttoned it and the soft breeze met the warmth of the sailor’s hands as they moved upward along her chest. They both wanted more, much more, but they knew they had to be careful until they could be someplace inside, someplace far removed from the watchful eyes of some of their fellow members of the armed forces.

The Seductress (MF)
Morgan Ashbury
In Shelf
$1.99
Tweets by
sirenbookstrand