Stranger On A Bus

'Strangers on a Bus' by Nicky B.

Cheryl likes to wear clothes that let her feel fresh air on her skin, but she doesn't like the presumptuous looks she gets from strange men. When a bold woman on a bus locks eyes with her, Cheryl is surprised by her own reactions. Maybe she is bisexual after all! When the bus stops and the woman stands up, Cheryl think she must be planning to get off, but the stranger has other plans, and she sits beside Cheryl without a word. By the time the seductress leaves without a backward glance, Cheryl is quite willing to flirt with strangers!

'The First Time - The Last Time' by Sally Quilford

It's attraction at first sight when an English woman in the United States agrees to dance with a local man. Living together seems like the logical next step, but is it love? Is she daring enough for him? All too soon, her temporary job comes to an end, and she must return home to England. Their last night together is one to remember, but will she be left with nothing but memories? She wonders if he is really willing to give her up. Sometimes it's just too hard to say good-bye.

'The "What-If" Monster' by Jade Taylor

What if a woman finally finds the man of her dreams? What if he asks her to marry him? And what if his friends plan a "stag' for him on the eve of his wedding? The narrator of this story decides to find out what her fiance is doing with the woman who was hired to dance for him on his last night as a bachelor. The soon-to-be bride realizes that she could create a scene -- or she could be part of a scene. 'What-if' questions can lead to some interesting answers!

Young Francis has been sent to stay with his wealthy relative, the ladies' man Carew. What is it about Francis that troubles Carew so much, especially when Carew is so fond of female flesh? When Carew's friend Priscilla arrives and allows herself to be the centre of attention for Carew and his servant Imran, Carew offers Francis a sexual education. When Francis blushes and refuses to touch the tempting damsel, Carew decides to punish the ungrateful lad. But Francis is not completely averse to a thrashing, and he has a few things to teach his guardian Carew.

'Keeping It Real' by Landon Dixon

'Doctor on the House' is a television program filmed in Vancouver, Canada, and sponsored by FemNet, a network that pays for elective surgery that is not paid for by under the government health care plan. Jake, the camera man, notices that Connie, the host, has a boyish figure: not his type. He is delighted to meet Eva, a woman who wants her enormous breasts reduced. In a pre-show interview, Jake shows her how much he admires her abundant chest. Eva enjoys his attention so much that when she goes to meet the doctor, she tells him she has changed her mind! Connie, however, wants her breasts enlarged. 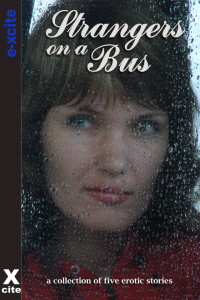 Stranger On A Bus

As the bus moved off again and she put her phone back into her bag, someone sat right next to her on the seat.
It was the woman, her grey eyes were looking right into Cheryl’s.
She started to speak but the woman quickly put a finger to her lips.
‘Shhh!’ she said, almost in a whisper and then she turned around to face the front of the bus.
After what seemed like a lifetime, Cheryl felt something on her leg.
It was a hand, a warm hand that was slowly sliding over her bare flesh to her knee.
As she watched it in disbelief, her heart began to pound hard against her rib cage.
The smooth hand moved up and down; down to her knee and each time it returned it moved the tight material of her skirt a little higher.
The palm turned to fingertips, gentle strokes in five places at once all over Cheryl’s thigh.
As the fingers slid up to the top, they curled under her skirt material and pulled it up a few inches. Cheryl wanted to stop her, they were on a bus in public, after all, but she just could not bring herself to.
She looked at the girl; the returned gaze was a narrowing of eyes to establish who was in charge.
Without thinking Cheryl opened her legs wider, pushing them against the woman, who moved her own out of the way so she could maintain her position. Straight away, fingertips were sliding up and down the edge of her g-string, stroking the very top of her inner thigh. Cheryl tried hard to calm her breathing; a trail of sweat ran down between her breasts as they heaved up and down.
The woman was looking straight ahead now, apparently unaware that her left hand was between a stranger’s thighs.
The material was swept aside gently and a soft hand cupped her pussy, it flattened and moved up and down against the wet lips.
Cheryl could not hold back and gave out a loud moan; as she looked around it was clear that it had caught the attention of a couple of the other passengers.
She quickly feigned a sneeze and was no longer centre stage; she looked at the red-head, who had a small smile on the edge of her mouth.
She felt her lips getting wetter as the hand moved up and down, the hand changed to fingertips and, before she could protest, the middle one slid inside her.