She wasn’t impressed by the kissogram and knew that she could do better. She loved men looking at her naked body so working as a stripper was right up her street. And it wasn’t just the guys that were lusting after her.

The spark had gone out of their marriage and the last thing he wanted was to spend a weekend away at a secluded cottage with their neighbours. But when his wife went without him, anger forced him to follow her. He was surprised by what he found in the woods and, for the first time in months, he and his wife were in total agreement.

Marianne knew exactly what Kate was going through – she had been through it herself. When she showed Kate what had cured the problem for her Kate thought that it might work for her too. Jim had been a bad boy and he deserved to be punished.

With her body wrapped inside a shiny crimson dressing gown Ellie was an expert in her field. Plenty had paid for the service she provided and Wes would say that she was worth every penny. Would Niall be brave enough to take her on? 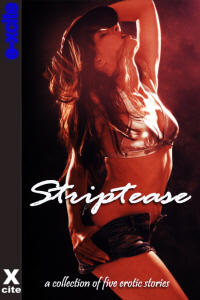 I’d been watching him as much as he’d watched me. He was in his thirties, wearing one of those collarless Armani suits and designer boots. A man with money. He probably hoped to pass for a creative type, but he couldn’t fool me – he was an accountant. I should know, after all. A cute, well-made, gel-haired accountant, with his blue eyes fixed on my sparkling silver pasties. I’d been sure if I skipped to the right, his eyes would come out of his head and follow, like a cartoon character.
I loved those little pasties – they were tiny sparkly butterflies that stuck over each nipple with a light adhesive. When I’d finished my act I was wearing nothing but silver stiletto heels, my butterfly pasties and the silver scarf I’d been wrapping and unwrapping around my body and dragging between my legs. The Armani guy was stunned; his eyes narrow with desire, and his breath half-hissing through his teeth, because he was so hot for me. But a stripper doesn’t fraternise with the punters and I could see Murray, the club owner, giving me the evil eye because I was still onstage when my music had ended. I winked at Mr Armani and strolled off, with my scarf trailing behind me. The whistles and cheers were the loudest of the evening. Pretty good, considering it was only my second night as a stripper!
Last night was my first night, although nobody would have believed it. None of the other girls did, nor the audience. And this man, standing about a yard from me now, staring at me with his cartoon eyes in the street light glare, he wouldn’t believe it either. I’m his dream come true, his sparkly, dirty, supple dream. I’m the woman he didn’t believe existed. His gaze sent shivers up my spine and I couldn’t resist lifting my right leg, turning it outwards so the knee slid up the rough brick and my micro-mini-skirt lifted too. He could see I had one hand holding open the lips of my labia so two fingers of the other hand could dip in and out of my cleft, drawing the wetness up to my clitoris which had its own little shiver as the cold night air struck it. He groaned and leaned forward, pressing his hands to the wall either side of my shoulders to stare down at what I was doing. I pushed my hips forward – the way he looked at me was bringing me off – I was too close to stop but I didn’t want to come yet either, I wanted to hold the orgasm close to the edge and make him watch me as I played, touching myself under his eyes. I needed a distraction.
‘Do you want to know how we got here?’ I asked, and my voice was husky with lust and pleasure.
He groaned again, shaking his head. I lifted my leg from the wall and tucked it around his back, pulling him towards me so I could feel the hardness through his suit as his cock pressed against my naked vagina. I let him rub against me for a moment before I pushed him away with my hips.
‘Wrong answer,’ I said.