Celes is a superhero sick of being a superhero. Sure, she’s low enough on the totem pole that she escapes the intense public scrutiny other superheroes face, but she has a set of issues that are about to blow up in her face. Mainly, her boyfriend is her arch-nemesis. The games they play are as steamy as they are dangerous. Dates? Need to stage an incident for that. They can’t be seen together at the local coffee joint, after all. And these supes have a super-sized appetite, in and out of costume. But karma has quite a bite, and they’re about to find out the consequences of their secret relationship.

Enjoy a riveting read full of action and steamy moments guaranteed to make you blush. There’s no fade to black in this story! 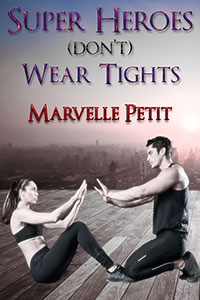 Lotus jumped from the rafters to the hard marble flooring. The alarms rang out in ear-blistering pitches. “Damn it!” At the opposite end of the room she saw her target running away. She knew him well. Absolute Zero, the man deemed her arch-nemesis by the Coalition. He wore the stealth suit today, which meant this would be a battle on foot. She dashed after him, moving at such a high speed that to the naked eye it would seem like she flew.

He jumped through a window. Glass shattered. She growled in frustration and dove through the hole. Upon landing the crisp night air bit a little harder than it had before. Yet again the most minor of exertions caused her costume to tear. She wouldn’t put it past Ora to create some sort of fabric that ripped like nylon stockings from the tiniest misstep. Female heroes made money off selling sex appeal, after all. I’m sending Zero the bill for a new costume after this.

She caught a glimpse of him running into an alleyway. As the distant sounds of sirens drew near, she chased him through the maze of alleyways, fire escapes, and rooftops. The clop of his steps stopped abruptly. She climbed through the open window at her right, entering some sort of abandoned office building. She slipped through the cubicles, slinking in the shadows, scanning the room for him.

Her head snapped back from someone tugging her hair. Teeth sank into the flesh of her neck. A mixture of pleasure and pain electrified her body. The cry died in her throat. She couldn’t give him that victory. She swung her fist as she turned around, hitting nothing. Those dark eyes of his seemed to light up in amusement. She grabbed his shoulder and slammed him against the drywall.

Dust rained down on them as their lips crashed against each other, creating a volatile mix of lust and adrenaline in her veins. He grabbed her ass and squeezed. She pressed her body against his, lifting her leg and wrapping it around his back. His hands ran over her thighs. His long fingers looped inside one of the tears and ripped it open, exposing most of her thigh. As he looped his fingers through the hole in her other leg, she jumped back, tisking her tongue in a playful chide.

The sirens rattled the thin walls. His lush lips twisted into a smirk. He ran with the grace of a cheetah and jumped out the window they entered. She silently counted to ten. He was quick, but not as quick as her. Catching the mouse this early into the hunt was boring.

At the count of ten, she jumped out of the window. The cops were within sight, just down the street, a block or so away. She glanced around for any sign of him. His form swung up the fire escapes like Tarzan. That idiot! They’re still too close! She easily caught him, leaping up the railings like a cat, using her superior agility to catapult herself onto him. The metal bars squealed under their weight. His fingers tangled in her hair and hungrily ate her lips. With a quick roll, he was on top. The fire escape swayed. The pain of his bites on her neck mixed with the adrenaline threw her into a euphoric rush. A gasp escaped against her will. He grunted and pressed his hips against her, erection like a metal bar stabbing into her flesh, almost painful in its hardness.

The sirens mocked them. She pushed him off, sending his body flying down. He caught himself and landed cleanly on his feet. He dashed forward, making a beeline for an abandoned storehouse. Damn it, that’s where they’re heading! She sped behind him, trying to catch him before he entered. He vanished inside. Harsh headlights stood at her back, pushing her along, swirling around the building like gnats.

“We have you surrounded!” some dumbass with a megaphone yelled.

She turned and faced the blinding lights. “I will handle this!”

“You have five minutes before we’re following you inside, Lotus!”

Like you guys can do anything against a supe. She slammed the door behind her.

The moment the door shut a thin cable wound around her torso and jerked her up to the rafters. Something hard pressed into the small of her back and clicked. Zero spun her around and placed a small flat metal tool in her palm. “Good luck.” He winked.

She ran her finger over the object. Thin and flat, with a small hook on the end. A lock pick. She blindly stabbed it upward, trying to find the keyhole.