Briant Latten is a boxer in the year 2070. The sport has been deemed too archaic and not entertaining enough for the modern audience. Only die-hard fans watch it, and with only one fight guaranteed to air left on the network schedule, boxing could become extinct.

But all Briant has ever wanted to do was fight both in and for the sport he loves.

The plan is to get his best friend Kaden to fight him…naked. Boxing is the last sport to go naked, as audiences crave their combination of nudity and violence after many years of censorship under tight network control.

There’s one big problem with this plan, aside from convincing the International Boxing Guild, and that’s Briant’s growing attraction to Kaden. The one rule in any sport which will have live coverage, no matter the network, is no erections. Will Briant, and therefore boxing, be doomed before the first bell? Or will there be such a sensation over their naked fight that their success will make it impossible for them to be together? 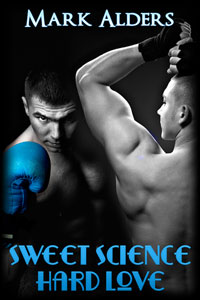 He stepped out of his shorts and let Carlo lead him into the shower. Seconds later, the warm water cascaded over his tired body, soothing his muscles, while the clean-up lad began to lick and suck on his knob with expertise.

“Do you think I should ask Kaden out?” Briant asked, looking down at Carlo while he worked. The lad’s mouth took in more and more of his length, groans and grunts accompanying his action. The man sure knew how to blow. He applied the right suction and tongue attention to make Briant as hard as possible in no time flat.

For the longest time, Carlo kept on with his cock sucking, making sure Briant’s ample length was massaged as best it could be by his lips. Not even someone as keen as him could take the whole of Briant’s cock until his nose was deep in his pubes, because being a good nine inches when erect saw to it most blokes couldn’t fit all of him into their mouths. Thankfully, Carlo always tried. Finally, he pulled away, but not before he licked the base of Briant’s head where his retracted foreskin rested, sending a wave of delight through him. “I don’t think he’s a gay boy, is he?”

Briant sighed. “No.” He touched Carlo on his head, moving his black, wet hair from off his brow so he could gaze into his eyes. “No, he’s not.”

“You’ve got it bad for this Kaden bloke, haven’t you?” Carlo looked up, those deep brown eyes so fucking sexy. He moved his hand harder and faster, adding, “I can tell you’ve been thinking about him, you’re super fucking hard today, Mr. Briant, sir.”

“I sure have been thinking about him, Carlo.” Briant felt the pangs of climax crawl through him, emanating from his balls which now tightened in his fuck buddy’s grasp. He gasped. “I know Kaden wants…I mean I think he wants me…but I’m not sure.”

The water helped relax Briant as much as Carlo’s actions, especially when the man worked his hands even more expertly over Briant’s throbbing cock, using his fingertips to massage his head, the folds of his retracted foreskin and his sensitive frenulum. Yep, he knew what he was doing. Briant gasped some more.

“If you ask me, I think you should go for it.” Carlo then took Briant into his mouth once more, not bothered by the water which flowed down his face so he had to close his eyes. He had a job to do and he was going to do it. Briant’s cock was taken almost to the halfway point inside the clean-up lad’s eager mouth. This time, the suction was harder and Briant couldn’t help himself.

“I needed that. Thanks, Carlo.” Briant wasn’t only talking about the blow job, he was also thanking Carlos for his advice. He was like a councillor with benefits. Very good benefits, because Briant loved how he gave him a certain kind of perspective while he pleasured him. Then again, having a fantastic looking bloke suck him so wonderfully, kind of clarified things for Briant. He was right, what did he have to lose?

The Warder's Leprechaun
Viola Grace
In Shelf
$3.99
Tweets by
sirenbookstrand