Sweet Temptations and the Surprise Billionaire

Always the baker…never the bride.

Ambitious and fresh-faced beautiful, Liliana McCrory has spent the last couple of years entirely concentrated on building her business baking elaborate gourmet wedding cakes. Just when Liliana’s almost all but given up on the idea of romance in her own life, she literally runs into the dapper best man at her most high profile wedding while carrying a tray of strawberry shortcakes. Despite the instant spark with the mystery man, the appearance of his fiancée by his side quickly dashes any thoughts of potential romance.

Technology innovator and billionaire, Cole Montgomery, always puts family first. After the passing of his beloved wife, Katherine, he focused on rebuilding his family and giving his young son, Jackson, a new mother figure by becoming engaged to the high school sweetheart he recently reconnected with. However, a chance meeting with the radiant natural beauty and business savvy Liliana at his best friend’s wedding plants seeds of doubt about his upcoming nuptials. When Cole hires Liliana to bake the cake for his own wedding, the two find themselves undeniably drawn to each other. As a surprising connection between the two is revealed, will Cole and Liliana listen to the voice in their hearts or risk missing out on the chance at a great love? 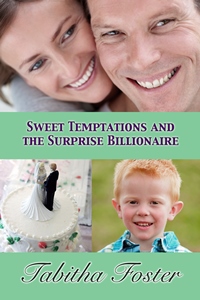 Sweet Temptations and the Surprise Billionaire

What can you do when the dream wedding is not your own?
Standing underneath one of the reception area outdoor tents, Liliana pondered that question. She looked out over the kind of setting she’d always hoped to have for her own wedding since she was a girl. She gazed over at the bluff, overlooking the blue waters of the Pacific near Santa Barbara, California. A cool ocean breeze brushed across her cheek, and a slowly setting sun painted the sky in brilliant hues of orange while a harpist played the classical works of Beethoven and Mozart as the finely-dressed guests made their way to the seats. She would describe this wedding as simple by most wealthy family standards but very elegant. For her, the perfect combination. And God knows she’d seen her share of weddings over the past few years. To be honest, most of them had started to blend together in her mind and become just a mix of gowns, first dances, and cake cuttings. But something about this ceremony, this day, felt different for reasons she couldn’t explain or shake.
Cake. That’s where Liliana came in. After having her bakery, Sweet Temptations, named the hottest place to have your wedding cake designed by Los Angeles Food and Drink magazine, Liliana went from a struggling baker barely affording the rent for her business to a workaholic who often spent seven days a week mixing flour, spices, fruit fillings, and secret recipe icings to help make a part of couples’ wedding dreams come true.
Normally, she wouldn’t travel and bring her employees this far from Los Angeles for a multiple day affair as an on-site bakery caterer. But this was Jack Van Buren’s wedding, Jack Van Buren of the family that owned the nationwide chain of Tio Jose’s Mexican restaurants. Usually, she’d just supply the cake that the main caterer would pick up and deliver to the wedding site. But the Van Buren wedding requested an entire spread of her baked goods: twelve flavors of cupcakes, gourmet cookies, and handmade fresh organic breads, and they’d offered a dollar amount that Liliana never dreamed she’d ever see when it came to one single job.
At only twenty-nine years old, she’d found herself on the fast-track of success in the highly competitive world of baking, and she loved every minute of it. Still, it didn’t stop her from occasionally thinking about what it would be like to have a special man in her life. But the last man she gave her heart to proved to be more of a hindrance than a supporter of her career, and the whole experience had proven to be hard to shake off.
“Hey, boss lady! You going to spend all afternoon day dreaming or help us ice these red velvet cupcakes?” her first assistant Grace cracked as she playfully slapped Liliana on the back.
“Sorry,” Liliana replied, smoothing down her white apron, not exactly glamorous attire. “I guess I zoned out for a second. Always the baker. Never the bride.”
“Well, now whose fault is that?” Grace said, reaching out and brushing some of Liliana’s wavy dark brown locks behind her ear.
Part right hand employee, part big sister/mom figure, Grace, still striking in her late forties with her blond curls and infectious laugh, could get away with being blunt with Liliana in a way others wouldn’t dare. A former sitcom actress in the early 1990s, Grace spent all of the money she made back then as fast as she could whip out her credit cards. When the money ran out, she’d found a new passion to bury her depression in…baking, and promptly gained one hundred pounds. After that, future roles had been practically impossible to get. After shedding seventy-five of the extra pounds, she’d answered Liliana’s ad for an assistant deciding if she could keep herself busy enough baking she wouldn’t have time to eat it all, too. Liliana had been skeptical of hiring her at first. After all, Grace was the woman who played the ditzy secretary on the office sitcom Cubicles in Hell, and as her first employee, she could barely pay Grace anything. But Grace persisted until Liliana gave her a shot, and it proved to be one of her best business decisions ever as Grace proved to excel in booking clients in addition to whipping up some yummy baked goods.
“I don’t need another dating lecture,” Liliana replied, dismissively waving her hand.
“If I was your age and looked like you…um…the trouble I could get into,” Grace said wistfully.
Liliana sighed loudly to signal she really didn’t want to get into this right now. She’d grown quite content with letting her bakery be the only commitment she needed…or at least that’s what she told herself. Still, as humble as she was, she noticed she could turn heads on occasion on those rare times she walked away from the oven. At a trim five foot five with just enough curves to be womanly, green eyes, and peaches and cream complexion, men had been known to flirt with her on a regular basis. But ironically, the more time that went by and the more weddings worked, the less romantic she felt overall. Romance had begun to feel like a business.
“The snicker doodles are done,” Jason, her other assistant, an eager twenty-three year old fresh out of culinary school, said as he walked over carrying a tray of the groom’s favorite cookies.
“Great. Thanks, Jason,” she said, glancing back out towards the ceremony as the wedding procession began. “We better quickly wrap up and cross check everything.”
As the three headed back into the catering tent where the groom even had ovens set up, Liliana looked back one more time at the ceremony as the first bridesmaid and groomsmen began making their way down the aisle.
One day, she thought. One day.