Take Me to Paradise

Set mainly in the Lowlands of Scotland, Take me to Paradise will both delight and shock the reader. It is the first book in the Seven Hill series and the author's debut novel.

Andrew Britton's mouth might as well be full of unsweetened cocoa right now, so bitter does he feel about his life. He has just discovered that he has an unquenchable desire for other men, although the very act disgusts him. Everyone around him seems to be happy and fulfilled. His estranged wife, Maggie is co-habiting with a woman in his house in Stirling. His first male lover is married to an eminent general surgeon in Edinburgh.

When not taking his pleasures on Calton Hill or in the gay sauna Andrew's brain is whirling with devilish plans. He is determined to destroy the lives of the people whom he once cared for. For him, revenge is a dish best served 'hot'. 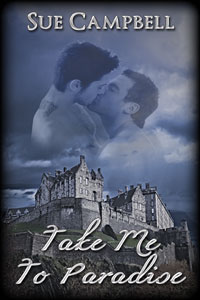 Take Me to Paradise

A very exhausted Grant turned his key in the front door four hours later. The two operations had been trickier than expected, and one of his gastroscopy patients had started bleeding in Recovery. Steve had seemed more focused though so that was something. As he stepped into the hall, Duncan was there to greet him. “Good evening, stranger,” he chirped. They wrapped their arms around each other, Grant dropping his briefcase onto the hall carpet. Duncan pushed his tongue into his mouth and thrust his crotch to meet Grant’s. All thoughts of the hospital slid from Grant’s mind as he felt his penis once again stir into life. “God, it’s so good to be home,” he stated firmly once Duncan had finished greeting him.

“You look exhausted, darling, but something down there,” he inclined his head, “is fast waking up!” He grabbed Grant’s swelling penis through his trousers and squeezed it lovingly. “I’ve supper on the table, and then it is playtime, big boy!”

Grant laughed as Duncan deliberately minced into the kitchen. He took off his shoes and, relishing the thought of a good meal and what is to follow, trailed behind Duncan’s receding bottom, rubbing his own crotch in a thoughtful way.