In Japan a war is brewing, the ancient Samurai are rallying for one last attempt to convince the Emperor that he has terrible advisors. Sena is a calligrapher and it only affects him because it's his lover who is going off to fight, instead Sena must stay behind and remember and wait for his return. 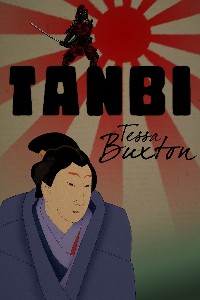 Sena opened the small cabinet and pulled out the ink stone, brushes and a block of ink and a knife, before setting them on the low table, he rearranged the shawl about his shoulders before sitting and opening the book he had previously set there. There was a warm pool of light from the lamp spilled across the table so Sena prepared the ink. He shaved some from the block, with an old knife and grinding it down with the handle and adding the water, drop by drop, mixing it with an old chopstick he kept for this exact purpose. Once he was happy with the opacity and consistency of the small pool in the granite ink stone he lifted the brush, running this thumb over the badger hair to separate the fibres and then put it down, lowered his forehead for a long moment and sighed.

He looked across at the bald magnolia branches that Nana had arranged in a small vase in the alcove, the strange black lines of the wood reminded him of the the gathered locks of black hair across Jin's back when they were bonded with sweat. He could feel the tears threatening again, but swallowed them down, and taking his sleeve between forefinger and thumb of his left hand, as he had been taught, to keep the fabric from the ink, he lifted the brush with the right, held out at a right angle, and began to draw the complicated kanji that made up his work.

All he could see, however, was not the characters dancing their way in columns down the page, but the image of haiku inked down Jin's back in their bed play. Jin had lain on the futon with the blanket draped about his hips, his hair was swept to the side and splayed across the pillows, and Sena straddled his hips, wearing a yukuta open to the wild and hot summer night, and with his brush he danced down the muscles of his lover's back writing words of promise and passion, as Jin smiled fondly and quietly up at him, golden in the lamp light.