Criminals beware the night. The Apparition is stalking you. No matter where you might hide, you will be found and you will no longer be a threat to anyone. You will be dead. 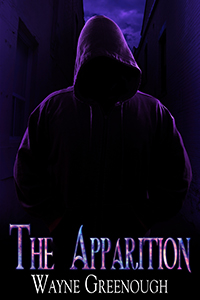 The door exploded inward. Wood splattered the six gangsters playing poker at a scarred table. Smoke filled the room with a stinking, death-ridden odor. One of the six managed to shout, “What the hell happened?” while the others coughed up saliva and vomit.

A blood curdling laugh chilled their bones and caused fear to chisel itself to their faces as they saw in the shattered doorway a menacing figure attired in black.

“I heard you were looking for The Apparition.” The hooded figure’s voice was a terrifying rumble, deep and deadly. “I’m here at your request.”

Five of the men’s eyes reflected terror that can be seen when death smiles at them. They huddled in the room’s dingy left corner like trapped rats. A sixth man steeled his spine and stepped forward. Anger bravely etched his face and deepened the three inch scar on his left cheek. He motioned to it. “The name’s Duke. You did this to me. Thought I was dead, didn’t you? Well, half of my frame is still alive in spite of the two slugs you put in it. And now it’s payback time for you. We knew the newspaper ads daring you to show up here at midnight would bring you to us. Six well-oiled automatics against your two old fashioned six shooters say the odds are in our favor. It also says you’re a corpse.”

Duke turned to the five men. “Put the sand back in your backbones, you white livered scum, and do what we’re being paid for.”

Guns were drawn and fired.