Jon and Luke plan a hike to the summit of Slain's Peak to heal their strained relationship. Instead, a sudden illness strikes Luke and an unexpected winter storm strands them. It doesn't help that Jon's secretly snorting meth whenever Luke's not looking. But then a mysterious stranger appears and leads them into a network of tunnels where they discover a flying saucer, alien drug runners, and their vampire dealers. 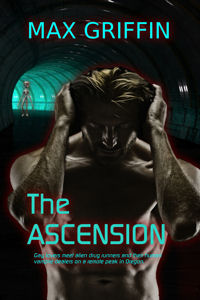 Fear tingled through Jon, as another figure appeared in the image. Its graceful gait made it seem to float, but that was not what inspired terror. The figure was short and unclothed but for a medallion hanging from a chain about its skinny neck. Random, frog-like bumps marred its body, and tinges of greenish-blue highlights shimmered on its skin. Its tubular, narrow torso undulated in slow pulses, as though with labored breath. Long, skinny arms hung to where its knees might have been, if it had knees. But its head, that was the most loathsome thing. It was huge, and heart-shaped, with no chin and a tiny v-shaped mouth. Its enormous eyes, limpid, almond-shaped pools of crystalline blue, dominated the face. Barren of emotion and shot through with menace, they scanned back and forth like radar. Black, narrow slits of pupils opened into where creature's soul might have been, if it had a soul.

In one three-fingered hand it held an empty syringe. While Ari stood still and placid, it stuck the needle into his neck and filled the glass tube with his blood. When the needle withdrew, a crimson drop beaded on his throat and glistened. The creature stabbed the syringe into its arm, pushing the human lifeblood into its veins, if it had veins. It sighed and leaned against Ari, whose arms embraced it and whose lips caressed that hideous head with a gentle kiss. Its pupils dilated from slits to round, opaque holes. It lifted its eyes upward, and its narrow chest heaved. A low moan passed its lips.