Matthew Carter, eighteen and orphaned recently due to the death of his father, continues on the family tradition of auctioneering. It is not his chosen profession, but one that is thrust upon him by circumstance.

Offered a chance to make some money by a man named Baltarus, Matthew reluctantly agrees, and to his surprise, ends up on an alien star-port where he auctions off rare items from all over the galaxy.

Matthew learns his trade and grows into it, but complications arise when he is forced to sell an alien woman named Anarra. He buys her in order to give her the freedom she desires. They become friends, and soon become lovers.

Life is good, but all that changes when he becomes a target of unknown assassins. Additionally, he is forced to sell a planet named Volarus, something that goes against his conscience.

Matthew finds out there’s more to life than making money, and races against time to find a loophole in order to stop Volarus from being next on the bidding block, as well as finding out the faceless killers who will stop at nothing to achieve their goals. 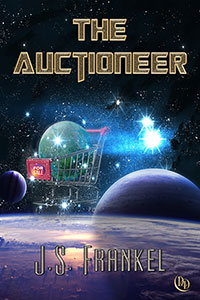 As usual, the hall was full, the air stuffy with the scent of stale cigarette smoke, perfume, and body odor. No air-conditioning—the cooler had broken down a while back, so I sweated along with everyone else.

Someone had brought in a couple of fans, and their blades turned in a slow, desultory manner. It didn’t help, and I swiped some sweat away from the back of my neck.

Occasions like this demanded I wear a suit. The last time I’d worn a suit was at my father’s funeral, one year ago. Give me jeans and a t-shirt any day of the week, but here, not happening. Auctioneers usually dressed conservatively. The bigger the house, the better you dressed. That was how it went.

As for everyone else, they’d come in early, met with the dealers, talking about prices and origins of goods and more. I knew these people. I’d been auctioneering at places like this in and around Portland for almost a year, a year after my father died. I’d been almost eighteen at the time…

“Are we starting soon, Matthew?”

The voice startled me. It was Mr. Simpson, a long-time auction patron. Somewhere in his eighties, retired and wealthy from real-estate investment, he lived alone and spent a lot of time at auctions, primarily to talk to other people and make a few buys. He had the cash. I don’t think he ever cared for the antiques he bought. He simply wanted to meet people.

Dressed in a sharply tailored gray suit, he had a head of sparse white hair, a prominent Adam’s apple, and an even more prominent nose. Whenever he met someone, he was unfailingly polite, knew the auctioneering game as well as I did, and maybe even better. He could spot a fake item or an attempt to rig bids from a mile away.

“Pretty soon, sir,” I answered, checking the crowd for anyone I didn’t know. Yeah, all the regulars were here. Not all of them were rich, but there were a few standouts.

Mrs. Hersh, who owned a high-end fashion boutique, Mr. Oliver, who owned three hotels in and around the state, and uh-huh, over there, Horace Waddle, a local businessman whose company made the best peanut butter on the local market.

All of them were in their sixties, fashionable to the max. While everyone else was well-dressed, they stood out, mainly due to their attitude and an aura of wealth they gave off. They were deep in conversation, but Mrs. Hersh picked her head up long enough to turn in my direction and offer a haughty stare. Thanks for your kindness, Mrs. Hersh. Instead of returning the stare, I waved back.

“If you want to get ready, I’ll get moving,” Mr. Simpson said. “And I know you’ll be watching the unholy trinity.”

He flicked his eyes in their direction. At times, those three—and others I’d known through various auctions—would bid-rig together.

Bid-rigging was against the rules—if a person could prove it. There were many ways to do it. One of the most common ways was for each person to outbid the other seconds after the auctioneer had intoned the price.

Mr. Simpson never had to. He had enough money to buy all three of them, but he never lorded it over anyone, least of all me.

“That’s okay, sir. Stick around for a while. We still have time.”

Truthfully, I didn’t want him to go. My nerves were eating away at my gut. Being in front of a crowd of people wasn’t for me.

“You’re still learning, Matthew,” he said as if sensing my uncertainty and then patting me on the shoulder. “It’s okay to have someone mentor you. Your father did a wonderful job. Now, all you have to do is gain more experience.”

My father had been an auctioneer, one of the best in the state. His father had done the same job. In fact, it went all the way down the line, or so I’d heard. Auctioneers were considered by some to be a rare breed, due to the internet taking away the personal touch, but I didn’t believe it.

People liked to be in contact with each other, and more than that, they wanted to see the goods up close and personal. A picture could be digitally enhanced. The real thing couldn’t, and the only way to make sure was to go and see it for yourself.

That’s where I came in—sort of. Call me the black sheep of the family. I had my heart set on going to university. Make something of myself, broaden my horizons…all that jazz.

“You can be whatever you want to be,” my mother had once told me. She’d died when I was six, and my father had never really recovered. He started drinking, got moody and bitter, but he never hit me or yelled at me.

Maybe it would have been better if he’d let it out once in a while. Instead, he became withdrawn, drank some more, and the only good thing about his boozing was that he never got wasted before doing his thing at the podium.

And what a sight he was up there! “Your father was one of the best,” said Mr. Simpson, taking a sudden trip down nostalgia lane. He practically teared up, reminiscing about how things used to be. “The way he worked an audience, it was magic.”