The Chronicles of Major Peabody: The Questionable Adventures of a Wily Spendthrift, a Politically Incorrect Curmudgeon...

Major Nathaniel Peabody, USA (ret.) first saw the light of day in December of 1987 in Vol. 1, Issue 1 of the Shooting Sportsman magazine. Since that date, he has lived on the back page of every issue of that magazine.
Peabody is a consummate waterfowl and upland bird hunter. Excepting those times when his profligacy assumes more than usual proportions, a well-endowed Spendthrift Trust allows him to hunt wherever he wants and whenever he wants. He has left his boot prints from southern Argentina to northern Canada – wherever geese or grouse or ducks or woodcock can be found.
Dogs display a sincere affection for him. His shotguns have no time to collect dust. He is not infected with the disease of politically correct posturing. Gun Controllers and Pseudo-Environmentalists don’t like him. This is the second volume of Major Peabody’s shotgunning tales.

About the Author:
An attorney, Galen Winter lived in Latin America and, for fifteen years, specialized in international law. He became a corporation counsel in Milwaukee, then in Chicago and, finally, engaged in the private practice of law in northern Wisconsin where, he says, “A man can associate with dogs and shotguns without arousing too much suspicion.”
Winter began writing about his passions - hunting and fishing - in 1984, contributing many articles to several national and regional outdoor magazines. He compiled a wild game cookbook, and wrote two novels. THE CHRONICLES OF MAJOR PEABODY is his fifth volume of short stories and essays.
Winter has hunted and fished all over the western hemisphere - in arctic islands north of Canada’s Nunavut Territory, in the Amazon basin, Cuba, Ecuador, Nicaragua, the Argentine Patagonia, Uruguay and various places within the United States where game birds are found. Jessine, his wife of over fifty years, put up with him through it all. 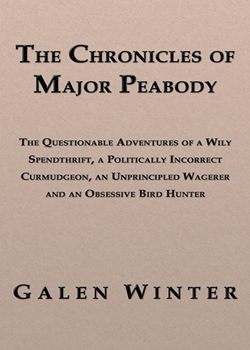 The Chronicles of Major Peabody: The Questionable Adventures of a Wily Spendthrift, a Politically Incorrect Curmudgeon...