Colin McDermott goes home to Sydney, Australia, to await his Green Card, which will grant him legal residence in the US. When the process drags on, he's worried he'll be denied, but he's also financially stressed. He's still paying his bills back in LA and coping with a sub-leased apartment in Kings Cross, the famed red-light district.

Forced to take a part-time job in a Darlinghurst cafe, Colin comes face to face with the past he'd fled and the childhood he sought to forget. And there's one other thing—he's reunited with the Ronan Hensley, the man he thought he could love until Colin shamed himself on a disastrous date ten years ago.

Can these two men rekindle their relationship? Can old wounds be forgotten and forgiven? As Colin walks the streets of the Cross—which, like him, clings to its shameful past—history comes back to life. He realizes so many things, but mostly that you can take the boy out of Australia, but you can't take Australia out of the boy. 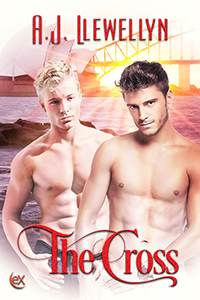 When Frank came into the kitchen a couple of hours later and told me I had a visitor, I was stunned. My father and brothers had been by a couple of times, but they wouldn’t drop by unannounced, and nobody else knew I was here.

It was him! Ronan!

My heart, my soul, my cheap Tom’s Shoes did wobbly things to my body. I slipped in a puddle of grease as I tried to open a container of butter and dropped it. I fell to my knees in front of him.

“Steady on,” he said. Oh, God. Ronan was still tall, handsome, muscular and gorgeous. His curly blond hair was shorter now, cropped close to his head. His blue eyes still crinkled at me in mischief and he still had the perpetual sunburn he’d had the last time I’d seen him. He was still the quintessential Australian man, a stark and enticing contrast with my dark hair and eyes.

“What the fuck?” Frank screamed running in behind him. “You can’t do that here. Not now! We’ve got a restaurant full of people!”

I stared up at him. What was he on about? I glanced back up at Ronan. Uh-oh, I was on my knees. Yeah, I guessed it must have looked bad.

Ronan helped me to my feet. “No worries, Frank. He just fell down.” He turned those startling blues back onto me. “Are you okay, Colin?”

“Fine,” I lied. I was in mortal agony. How could I pull a long shift with my right knee banged up like this? At least I wasn’t vomiting all over him.

Frank slapped a bunch of new orders on the tabletop beside me.

“Make it snappy,” he said, reminding me of all the reasons I disliked him. Ronan raised a brow but said nothing.

“What time do you get off work?” he asked as I prepared the panini for grilling.

He nodded. “How about we meet back here for a coffee?”

I guess my grimace said it all.

“Lindsay said you’re living in Elizabeth Bay. How about we meet up at the Cross? Do you remember the Piccolo Bar?”

Did I remember it? Heck, it was one of the few old haunts I’d had that still existed.

“I love the Piccolo.” My knee throbbed, but so did my heart. And it won.

“See you there at six-thirty.”

“Can we make it six-forty-five? Just in case I get stuck a little later?”

“You got it.” His rough hand cupped my cheek for a brief moment, then he was gone. The second he left, I grabbed a bag of frozen peas from the freezer and tied it to my knee over my jeans with duct tape we kept on hand for the fridge door that had a tendency to fall off.