Emmeline, the wife to a powerful guild master, needs to provide her aging husband with an heir.  Forced to make harsh decisions, she pays her servant to go out and to pay a man for a night of 'service' that will leave her with the child she needs to give her husband.  She knows nothing about the nameless man who takes up her offer.  For coin, he will give her what she needs.  However, instead of paying the man and them parting with little thought to what happened, she gets a night of passion that haunts her forever.  She gets the child she bought...only life demands a higher payment ten years later.

Niall fitzJulien is the new overlord of Castle Morlaix.  To his shock, the woman who stands before him to pay homage holds the hand of his son--his ten-year-old son.  He recalls that night a decade ago, when he'd awoken the next morning from a night of passion only to discover the woman had slipped away from his bed...and taken his heart.  Now he sees how cruelly he was used, how he has been denied his son.  No longer.  Now she is his vassal, she serves him.

A dark, strong tale of a Medieval woman who does what she must to survive, of the man she came to love, the man she must now face with her deceit. 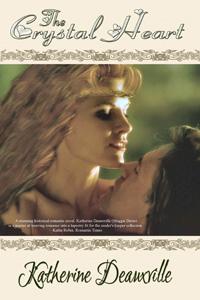 The merchant's wife. A nerve in his cheek twitched.

She was medium tall, pale-lipped, with large green eyes. Against the velvet bed hangings her hair, unbound and flowing over her shoulders, shone like a copper river laced with streams of fire. An embroidered robe hung loosely from her shoulders, yet it was plain her form was slender, her breasts full and high.

Unbidden, his heart leaped in his chest.

She was not only young, he thought, peering at her, but beautiful. What had the old knight told him? Married three years to an old merchant without getting a child? Most girls of her class married at fourteen. Some at thirteen.

Seventeen, Niall told himself. Surely not a day more.

The next instant he experienced a sudden surge of unease.

This was not the old harpy Orion had prophesied. Niall supposed there were some who might not care for her short, straight nose, the saucy set of her cheekbones, her catlike green eyes, but to him she had a loveliness that reminded, with her blazing hair, of the orange and red lilies growing in the meadows in midsummer.

Studying her, he decided she was certainly not the cool, distant fair lady of the troubadours' songs, but a golden vixen, a blazing wood nymph, all cream and fire and emerald eyes. So entrancing, he remembered Orion's warnings against witchcraft.

A chill ran down Niall's back and prickled the hair on his neck. He chided himself for being a fool. The girl was delicate as a tawny flower. Her lips trembled uncertainly as she looked at him. It would be stupid to be frightened of a maid whose only sorcery was her beauty.

She held the front of the embroidered robe together with white, soft hands. She had graceful fingers, with pink, well-kept nails.

He suddenly remembered that his hands were blackened from hard duty and the care of weapons and horses. And he was just as aware of how he must look to hera rough-appearing young knight, broad through the shoulders, with dark red hair that could never match the fiery blaze of her own. Wearing only his bedraggled hose, and in his bare feet, having left his boots and cross garters behind in the room with Orion.

Jesu, it was too late to think of all that. He was suddenly eager to get on with it.

Niall said, somewhat hoarsely, "I amI believe I am the one you await, Madame."