The Crystal of the Ukteena

The ancient Native American shaman knew death was near. He entered the dark cave and placed a stone over the pot holding a creature that must never again be unleashed. Hundreds of years later, Grasping Raccoon, a tribe outcast, finds the rare crystal, and the Ukteena rises again. For a short time, terror covers the tribe as if the great net in the sky has fallen to trap them all. Only Red Crane’s love for Saucy Calf is able to overcome the Ukteena, but his soul rests uneasily.

Clarissa Ford, an assistant professor of organic chemistry, feels the crushing weight of fighting a tenure battle. Colleagues pick at her research, and department chair James Aydin seems to have it out for her.

When her tension is about to kill her, she finds herself under investigation for the illegal production of methamphetamines. To make matters worse, Gideon Coleman, an attractive FBI agent, has her on his radar.

As hard as Coleman tries to capture the criminal responsible for the drug related murder in a Native American cave site, he finds himself more drawn to the main suspect than to his investigative task. Strange and atrocious murders seem to follow her, and now he is having strange dreams.

The Ukteena has been released, nourished by an inadvertent blood sacrifice. The drug investigation is dwarfed by the horror that has been set free. Red Crane has chosen Coleman as a vessel, for the soul of his beloved Saucy Calf shines forth from Clarissa. It is time for the Ukteena to be quelled for good. 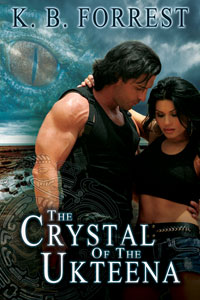 The Crystal of the Ukteena

The hunter knew that he was not going to make the same mistake twice.

His hands were covered in blood. Saucy Calf was lying at his feet with her life pouring out. Her eyes were wide, full of a knowledge that scared him. She coughed, and her lips were stained red with her blood. Her eyes were shining with a kindness that he knew would slide away from him and be gone.

“I’m never gone,” she said. But her lips hadn’t moved. Her voice was piercing, and unspeakably beautiful. “You just can’t see me. Open your heart to me, beautiful one. All I want is for you to see me.”

There was no compromise. He had seen death so many times. The rocks around the cave entrance glowed with the light of the moon. His eyes found Grasping Raccoon.

“What have you done to your lover? Look at that. You did that.” Grasping Raccoon jumped up and down, laughing. “Now you’ll know the pain you caused me.”

Red Crane felt himself coiling to strike. But the Ukteena struck him first.

Grasping Raccoon screamed and was tossed high in the air. The Ukteena shook him in his jaws and flipped him almost playfully into the air.

Then it turned to Red Crane, sinewy scales sliding past each other. Blood dripped from the jaws of the monster. When it opened its mouth, teeth as long as first year antlers gleamed at him. The Ukteena was death. Yet, there was an innocence in its lack of knowledge, a grace in the pure rage that spoke of deeper realms of pain, of deeper redemptions than he could see. The Ukteena’s light burst forth from the forehead of the beast.

And for the first time, Red Crane could see.

And it was all just as they said it would be. His world fell apart and his mind shattered like a mirror fusing into a shining surface from a million tiny pieces.