Allied with no nation, following no faith, allowing no hope, the Death Ship terrorizes the world. Its captain is the breath of cold air on your cheek in the dead of night. His hand is the presence on your shoulder when alone in the dark. Turn your head, look from the corner of your eye, see the gaps between the worlds and fear the approach of the Death Ship.

Arabella Wyatt, author of the Steampunked Pirates, uses fantasy to take a clinical look at the nature of superstition and the dangers of fundamentalist believers rejecting scientific truth. In doing so, she creates a fable for our times, showing how such beliefs will result in the downfall of humanity. 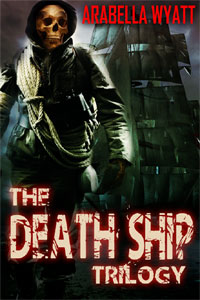 Looking out at the Gulf of Arta, Cleopatra VII, self-proclaimed reincarnation of the Goddess Isis and sovereign of the Ptolemaic Egyptian Kingdom, strode fretfully along her galley, passing row after row of slaves, bodyguards, handmaidens and soldiers.

This was the final battle. If she and her lover, Marc Anthony, could overthrow the forces of Octavian, they alone would control Rome and all its power. The might of Rome coupled to the wealth of Egypt was a prize worth fighting for, especially with her own empire fading in significance and power.

This, then, was the day of reckoning, when the strong would triumph. So why did Marc Anthony not attack? She glanced at the dozens of immense quinqueremes of Marc Anthony’s fleet. Many of them were on fire, the thick black smoke coiling up into the overcast sky.

Marc Anthony had ordered his own ships to be set alight. Malaria had claimed so many of his men, he no longer had enough left to crew the entire fleet of five hundred ships, so he burned their tactical advantage in order that the vessels would not fall into enemy hands.

The omens were not good. The gods were toying with them. Being a self-proclaimed goddess mattered little if the true gods had willed your fate. Maybe Cleopatra had once believed her own myths of divinity. Today, with fire burning and an enemy fleet staring her in the face, she was not so sure. Death hung over the entire gulf.

“Why does he not make a move?” she snapped at her commanders.

The men shuffled and tried to avoid her glare. None wished to draw attention to himself. The queen’s wrath was well known against those who gave bad advice, and in war, any advice could turn out to be bad.

“Well? Answer me!” demanded the queen of queens.

“It could be a feint by Marc Anthony,” said Panhsj eventually, a young, arrogant officer.

“Maybe a ruse to trap Octavian,” said another after a long pause.

“More likely Marc Anthony realises he has already lost, given the malaria that has decimated his forces and the exposure of his battle plans by the traitor Quintus Dellius,” said a deep, grating voice.

Cleopatra swung round, looking for the speaker. It took her several seconds to realise that the voice came from beneath her, from the crew of slaves who worked the oars. For one to speak without permission was unheard of on the galleys. All slaves knew their place and that place was as cattle, beasts of burden for those higher up in the world. This knowledge was driven in over a lifetime of indoctrination and was emphasised by the lash of a whip on a daily basis.

“You dare?” hissed Cleopatra in fury, looking for the speaker along the long row of shackled men. “You dare raise your voice in the presence of the goddess?”

“Does the goddess have the faintest idea what is truly happening here?” replied the voice. The speaker looked up, his mocking eyes burning intensely. “Does the goddess know anything of the true threat that faces us?”

“You will hold your tongue, slave,” yapped Panhsj. “If you do not, I will see to it that you lose it.”

“You have no power over me, over any of us, not now,” growled the slave. “You have only the threat of violence and that is no longer effective.”

“We will soon see about that,” snapped Panhsj as he unwound a leather whip from his belt. “When I have removed your skin, you will no longer be so keen to talk.”

“I can talk as much as I wish, for we are marked for death.”

“You dare spread such sedition through the fleet?” demanded Cleopatra, a cold shiver of apprehension passing through her. The slave seemed so certain. He really seemed to believe that he had no need to be fearful of his queen for he was facing death itself.

“It is not sedition,” replied the slave, his facial muscles twitching as he finally put words around his knowledge. “We are being tracked by the Death Ship.”